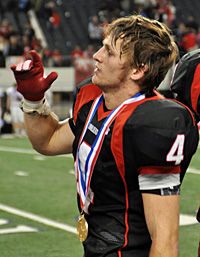 Coming off the school’s first loss after 48 straight games, the Cavaliers took on current Texas A&M phenom Johnny Manziel and Tivy with plenty of questions to answer. Colin Lagasse needed to step up after filling in for the injured Michael Brewer and shake off the frustration of quarterbacking the team in its loss to Aledo. Things started roughly, with Tivy taking a 19-0 lead. But the Cavaliers fought back. Lagasse found his form on offense and rallied the team to a 37-33 lead. With Manziel driving Tivy, coaches threw Lagasse, who earned all-state honors as a safety in 2009, into the game at the end, and he ended up making a game-saving interception in the end zone. “I get in there and the ball goes straight to me and I intercept it,” he says in Chapter 16.