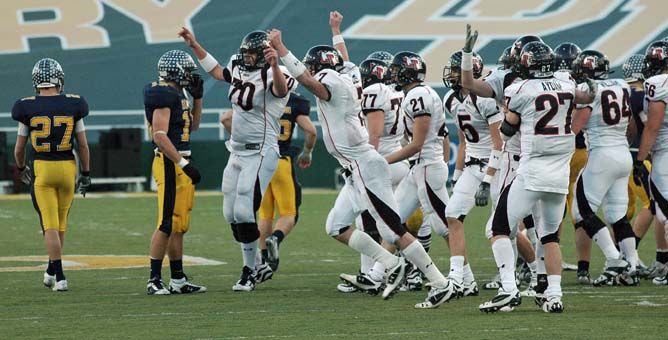 Cinderella’s first dance, and the clock never struck midnight, though it got close. Here is the story I wrote for the Lake Travis View back in 2007:

Waco (Dec. 23, 2007) - For nearly the entire football season, the Lake Travis defense rode the coattails of the Cavaliers’ explosive offense. But when the state championship was on the line Saturday, the defense stepped up and secured the school’s first title, holding off top-ranked Highland Park for a 36-34 win.

The Lake Travis defense, which gave up 471 yards of offense on the windy day, didn’t give up any once the Scots drove to the Lake Travis 25 yard-line with less than 2:00 left. Standing on the sidelines, junior quarterback Garrett Gilbert said he had no doubts the defense would hold the line.

“Our defense has come up big during the season, against Connally and Vista Ridge, when we needed them to,” he said. “Granted, that wasn’t against this level of competition, but we had confidence they would make a play.”

Highland Park made its last attempt at a game-winning rally by quickly marching into Lake Travis territory with 4:00 left. Winston Gamso completed three straight passes to reach the Cavalier 36-yard line, and Lake Travis coach Jeff Dicus called time out to settle his troops down.

On the next play, Tanner Kyle sacked Gamso for a loss on second down, but the Scots marched on when Gamso found Seth Gardner to convert on third down, moving the ball to the Lake Travis 31. On first down, Gamso rolled right and tried to hit Chase Davis in the end zone. Davis snuck behind Marcus Pate, but Pate jumped up at the last minute and the pass hit him in the back as he guarded Davis.

After a penalty backed the Scots up, Gamso hit Travis Bellinger for nine yards to the Lake Travis 26. On third down, Gamso scrambled, but Mike DeWitt knocked him down after a short gain, leaving the Scots facing a fourth down at the Lake Travis 25.

Trailing by only two, a field goal try by Chris Morris was never a possibility for Scots coach Randy Allen. Moving into a 30-mile per hour wind, the Scots called time out and drew up what would be their final play. Gamso tried to hit Austin Mai on a quick slant, but the ball bounced through his hands and fell harmlessly to the turf, giving Lake Travis possession.

“The game was on the line for us and I really didn’t know what to think or feel watching it,” said Jason Bird. “But our defense came up big and won the game for us.”

“We weren’t worried,” said senior defensive tackle Matt Kuenstler. “We knew we would get the job done.”

Needing only one first down to kill the clock and win the title, Gilbert delivered like he has done throughout the playoffs, scampering for 12 yards on third down, setting off a black and red celebration on the field at Floyd Casey Stadium.

“This is wonderful,” Kuenstler said after the game. “I’ve never felt anything like this before. This is well worth everything we’ve been through, all the hard work.”

He was the one Cavalier who could put his feelings into words.

Senior receiver Jason Bird, who set the Texas High School single season receiving record and had 13 catches for 145 yards and a touchdown in the title game, couldn’t come up with many.

The title game turned from a first half shootout to a second half battle of defensive wills. Lake Travis led 29-20 at halftime as both offenses had their way. Gilbert continued his torrid postseason play by completing 12 of 19 passes for 272 yards and three scores. Highland Park’s offense was just as effective, with Gamso and Dutch Crews combining for 299 yards and three scores of their own despite being under constant pressure from Bryant LaGasse, Ryan Erxleben and Harry Hatch.

The difference, though, came late in the second quarter, when the Lake Travis defense made two timely plays to preserve what was a 22-20 lead. The Scots appeared headed to taking their first lead of the game. Gamso found Davis streaking past a defender toward the end zone. Lake Travis’ Sean Robinson tracked Davis down inside the 5-yard line and stripped the ball away. The ball bounced into and then out of the end zone for a costly turnover with 3:41 left in the first half.

After a Lake Travis punt, the Scots drove deep into Lake Travis territory again before the Cavalier defense stiffened. On second down from the Lake Travis 4-yard line, Michael Thatcher was stopped for a loss, and Gamso’s third down pass was incomplete, setting up Morris for a short field goal. But DeWitt stepped up and blocked the kick, and Pate returned the block to the 32-yard line with 0:34 left.

The Cavaliers seized the momentum quickly. Gilbert hit Bird twice to get near midfield, and after a quick spike, with 15 seconds left, he got away from a blitzing Scot and found Cohl Walla behind everyone for a 52-yard touchdown, giving Lake Travis a 29-20 lead at the half.

“That was a huge momentum swing for us at the end of the half,” Dicus said. “It allowed us to go into the half on a positive note.”

Bird said he knew the team wouldn’t sit on the ball to protect the lead before the half ended.

“We wanted to attack,” he said. “That’s how we’ve played all year. We attack, we have fun, we keep moving the ball.”

Gilbert gave the credit to Walla for getting behind the defense.

“That was a huge play,” he said. “Cohl ran a great route to beat the defender.”

Highland Park kept the pressure up in the second half, closing quickly to within 29-27 early in the third quarter, using the wind and an aggressive defense to keep Gilbert and company in check. The Cavalier defense was up to the challenge, though, and when Pate intercepted a Gamso pass midway through the fourth quarter, Lake Travis had the opportunity it needed to get some breathing room.

After the Scots were flagged for holding Bird downfield, Dicus dipped into his bag of tricks, calling for the Boise State “Statue of Liberty” play that won last year’s Fiesta Bowl. Gilbert took the shotgun snap, hid the ball in his left hand behind his back and faked a pass with his empty right hand. Chris Aydam took the ball and beat the HP defense into the end zone for the score with 6:53 left, his third touchdown of the day.

The Scots were undaunted. They answered quickly, with Gamso sneaking across just 43 seconds later to cap a 50-yard drive to close to 36-34. But the Lake Travis defense did the rest, giving the school its first ever title, and the title just five seasons after the 2002 team went 0-10.

“So much work went into this from so many people,” Dicus said afterwards. “Five years ago people said you couldn’t win at Lake Travis. Well, look at us now. It took a lot of hard work, belief in our system and support from everyone in our great community.

“This is just unbelievable. I’m so proud of our seniors, proud for our community.”