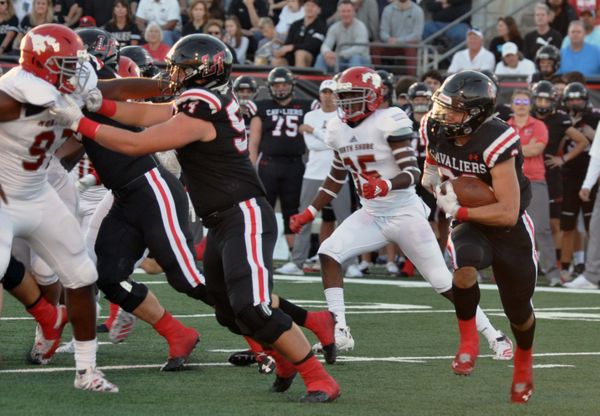 The more things change, the more...LT expects to remain in chase for state title

For the last five seasons, the road to the state championship has gone through Lake Travis.

Those last three losses have brought this year’s senior class to an unacceptable realization. Since enrolling at the high school in the fall of 2017, the Cavalier seniors have yet to take that final step.

“This group wants to win a state championship,” defensive tackle Raleigh Erwin said. “We’ve never been a part of one. It feels like every class up until ours has seen it happen. That is something we want to be a part of. We want that ring.”

To get that ring, a new group of players must step into vital roles. Lake Travis graduated 15 starters from last year’s semifinal team. The cupboard, though, remains far from bare.

“In no way is this a rebuild,” Lake Travis coach Hank Carter is quick to point out. “We have a ton of great kids who are ready to roll.”

“Even though we lost some great players, we have a lot of guys ready to step up,” quarterback Nate Yarnell said.

While returnees such as Weston Stephens, Jackson Scruggs, Lake McRee, Raleigh Erwin and Ife Ohalete are known commodities, other familiar faces will find themselves in new roles as the coaches look to put their best 11 players on the field as quickly as they can identify them.

“It will be really interesting to see what our best 11 is,” Carter said. “It will be a unique year for us with a lot of versatile kids. We’ll just throw them in the tumbler and see what comes out.”

Aden Nava and Wesley Erwin have been varsity players since they were sophomores, but they’ll be among the Cavaliers with new roles. After two years on defense, Nava should figure into the Cavaliers’ offensive plans at receiver. Wesley Erwin will be less likely to carry the ball as a running back than he will be to hunt them as a linebacker.

Carter’s especially focused on the trenches. Offensively, the Cavaliers want to give Yarnell time to find open receivers and maintain the balance they found last year behind Stephens, Marcelo Alanis and an effective running game. Three offensive line starters graduated, but Jacob Tracy and Judge Niland won’t be wonting for talented teammates.

“Our offensive line is a bunch of big, strong, smart aggressive guys,” he said. “I think we have 7-8 guys in there who are starter-quality.”

Defensively, Raleigh Erwin leads a group that will blend size and speed to slow opposing offenses.

“Our defensive line has really worked on our speed and quickness,” he said. “We’re not going to be as big as the line at say, North Shore, but that doesn’t mean we can’t be quicker than everyone.”

It’s no accident that Erwin mentioned North Shore and its massive offensive line. A third straight meeting may well be in the cards, but the Cavaliers aren’t putting any carts before the proverbial horses. Players know there’s work to be done, one painful step at a time.

“Obviously we want to win it, but we can’t focus on it from the start,” McRee, 100% healthy after a preseason knee injury sidelined him for all of 2019, said. “We need to take it one day, one practice at a time. It’s a process.”

“We’re all preparing vigorously,” Yarnell said. “We know the goal and we’re working toward it harder than ever. We will make a run at it and it will be exciting.”