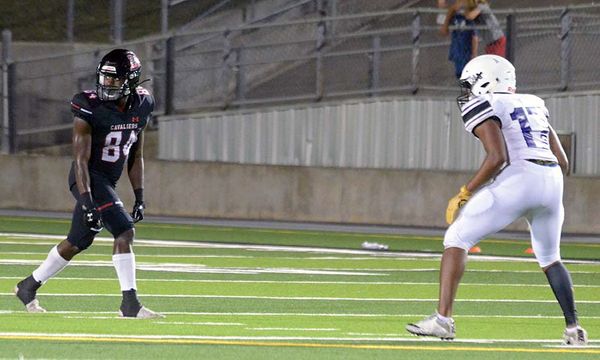 Cavaliers shake off rust in scrimmage with Cedar Ridge

Based on the limited sample size of one 12-minute scrimmage under game conditions against Cedar Ridge, Lake Travis looks right on schedule as it prepares to open the 2020 season against Westwood on Oct. 1.

“When we got into the competitive part of the scrimmage, we did get into a better rhythm,” Cavaliers coach Hank Carter said.

Defensively, Lake Travis held Cedar Ridge to a single first down on two possessions sparked by senior Raleigh Erwin. Offensively, the Cavaliers finished with a pair of touchdowns and found a candidate for a 2020 breakout star in newcomer Michael Kennedy.

Kennedy caught a short pass from Bo Edmundson and broke free for a 36-yard touchdown and then set up another score with a 16-yard grab on the team’s next possession.

“I’m just blessed to get that chance to show what I can do,” Kennedy, who moved to Lake Travis from Tennessee between the first and second semesters of the 2019-20 school year, said. “I wasn’t expecting to be a main target, but we just executed the plays and I was open. I’m just happy to help the team.”

He finished the scrimmage with 5 catches for 115 yards in his unofficial debut playing primarily in the slot.

“I’m very encouraged by the way he caught the ball and excited by what he can do with it after he catches it,” Carter said. “He’s just jumped right in.”

Kennedy joins a receiving rotation that will lean heavily on the more familiar trio of Jackson Scruggs, Aden Nava and Lake McRee. Nava, playing receiver extensively for the first time, made four catches in the scrimmage. Scruggs and McRee combined for three more as nine different players caught passes.

Edmundson, a sophomore competing with junior Isaac Norris for the role of interim starting quarterback, led both of Lake Travis’ scoring drives in the live period.

“We had to knock some rust off early in the scrimmage and just get comfortable with playing [against another team],” Edmundson said. “Then it was time to go. We got some one-on-one matchups and we should win those matchups when we need to.”

Edmundson completed 5 of 8 passes on his two possessions for 105 yards and a score. Including the controlled sets of plays leading up to the live quarter, Edmundson completed 9 of 14 passes for 192 yards. Norris completed 7 of 15 for another 73 yards.

“Both guys had some good plays, but both also make some decisions that coach [offensive coordinator Tommy] Mangino will correct when they watch film,” Carter said. “Our goal heading into the first game is to make sure that we have every position right. We will focus on that this week.”