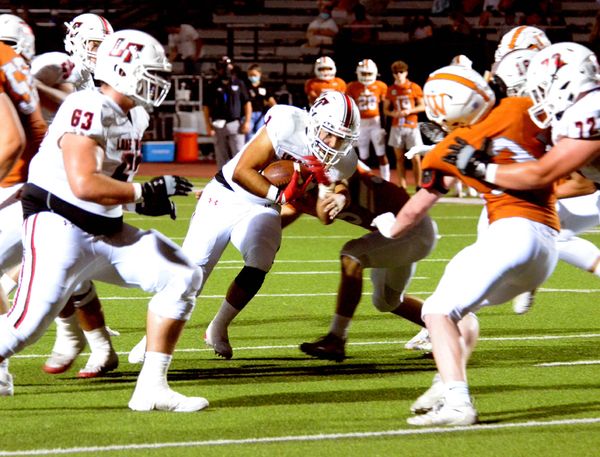 Cavaliers rev up after sluggish start, run wild against Westwood

Round Rock – So much for opening night jitters. Lake Travis, playing without its University of Pittsburgh-bound quarterback, racked up 587 yards of offense in a 63-20 domination of Westwood Thursday night at Dragon Stadium.

Lake Travis (1-0) used a bruising rushing attack to take pressure off of sophomore quarterback Bo Edmundson, who started in place of the injured Nate Yarnell. Edmundson completed 12 of 18 passes for 196 yards and two touchdowns, and the running back trio of Weston Stephens, Marcelo Alanis and Gary Gordon ran for two touchdowns each to pace an attack that gained 363 yards.

“I’ve been saying this for a while now, but we’ve never had depth at running back like we have now,” Cavaliers’ coach Hank Carter said.

“The defense was giving us the ball in good spots, and the running back and the offensive line carried the way,” Edmundson said. “I was having a lot of fun handing the ball off to those guys.”

Edmundson had his share of success throwing the ball. He started quickly, completing his first five throws, including a 25-yard touchdown pass to Jackson Scruggs on the Cavaliers’ first possession. That helped him settle in.

“It was pretty cool getting out there and playing with the boys,” he said. “Throwing a touchdown pass on the first drive really gave me confidence.”

Lake Travis’ defense also played with confidence, holding Westwood’s high-powered offense to less than 150 yards late into the third quarter. R.J. Martinez threw three touchdown passes for the Warriors (1-1), but two came in the fourth quarter, including a 94-yarder to Zach Pryor, after Lake Travis had opened up a 56-6 lead.

Martinez finished with 263 yards on 20 of 32 passing. Lake Travis’ defense, led by Raleigh and Wesley Erwin, sacked him four times.

“We played their screens very well, and we changed our defense a little bit at halftime to keep him from getting away from the rush up the middle,” Wesley Erwin, who moved to linebacker from running back, said.

“The key was slowing our rush down a bit and keeping him in the pocket,” Raleigh Erwin said. “They have a really good offense, but our defense played with a chip on its shoulder. I’m proud of our effort.”

“We executed at a really high level offensively tonight,” Carter said. “For a first game with a new offensive coordinator, a new offensive system and a sophomore quarterback, I thought it was a pretty good game.”