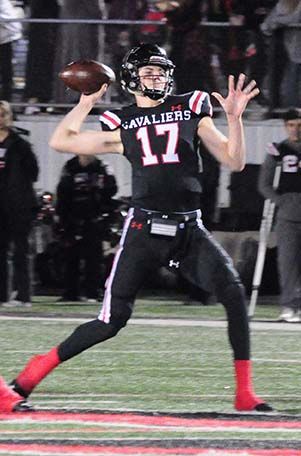 Cavaliers coach Hank Carter said Saturday that Yarnell suffered an injury to his right – throwing – hand during a practice Tuesday (Sept. 8) and could miss several games.

“The injury ended up not being as bad as we thought it might be, but we’re not sure of the time frame at this point,” Carter said, without going into specifics of Yarnell’s injury.

Yarnell, a 6-foot-6 senior who has verbally committed to play at the University of Pittsburgh, posted a 6-0 record as a starter in 2019, filling in when Hudson Card missed time with an injured foot. He threw for 1,501 yards with 17 touchdowns and completed 68.3% of his passes last year.

With Yarnell sidelined, Carter said the trio of junior Isaac Norris, sophomore Bo Edmundson and junior Jonathan Haley will battle for playing time. Norris, who’s played quarterback in the past, has the most varsity experience. Playing primarily as a tight end, he caught 17 passes for 162 yards and three touchdowns. He also completed both of the passes he threw last year, including one for a touchdown. Haley, a junior varsity starter in 2019, appeared in one playoff and completed his only pass for a six-yard gain.

Carter said each took significant reps during a scrimmage Saturday morning. The coach and first-year offensive coordinator Tommy Mangino were planning to review the film to gauge each player’s performance.

“We obviously need to see more,” Carter said before deciding who’ll start the season opener against Westwood on Oct. 1. “I’m sure we’ll see that they all did some good things along with things that will need to be corrected.”

The coach, entering his 11th season guiding the Cavaliers, said starting the season without Yarnell on the field will make a difference, but he is confident that the rest of the team will step up and help carry the load offensive load.

“Not having Nate will be a blow to what we are trying to do,” Carter said. “But our offensive line and our skill players are playing really well. They are really talented so they will take some of that pressure off the quarterbacks.”

“Lake looked fantastic,” Carter said. “He is big and fast and he made a number of plays on balls above his head. You can really see why so many colleges want him to come play for them.”

McRee, committed to Southern Cal, missed all of 2019 with a knee injury.

If Yarnell’s recovery takes up to six weeks, he’d be set to return for the Oct. 16 game at Hays or the Oct. 23 game against Austin High.