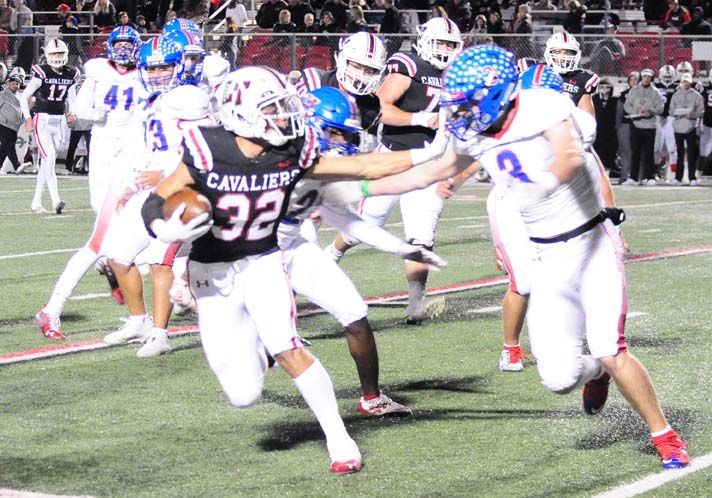 Nate Yarnell threw four touchdown passes – three to Kyle Eaves – and Lake Travis clinched a share of the District 25-6A title and top seed in the Division I playoffs with a 59-27 win over Hays Friday night.

Making his second start in place of the injured Hudson Card, Yarnell completed 13 of 18 passes for 257 yards.

“He’s been a big player for us for a long time,” Carter said of the senior receiver. “We’re going to need him, and all of those guys on offense, to continue to step up.”

Weston Stephens also stepped up for the Cavaliers, rushing for a career-best 146 yards on 19 carries with three touchdowns.

“I’m proud of Weston and the way he ran the ball tonight,” Carter said. “Our offensive line got after it pretty good.”

Hays (7-2, 5-2) scored a pair of touchdowns – aided by an onside kick – to close within 31-20 in the third quarter. Xavier Green, who rushed for 126 yards and two scores, broke free for a 26-yard score, and JoeAngel Carrasco caught a 26-yard touchdown pass from Durand Hill.

“To Hays’ credit, they made some plays in the second half with a couple of long runs, but overall I was pretty pleased with how we played,” Carter said.

Eaves stopped the Rebels’ momentum by catching a high, short kick, and the Cavaliers scored a pair of touchdowns to regain control.

Grayson Sandlin caught five passes for 86 yards and a touchdown for the Cavaliers. Carrasco rushed for 102 yards on 11 carries for the Rebels.