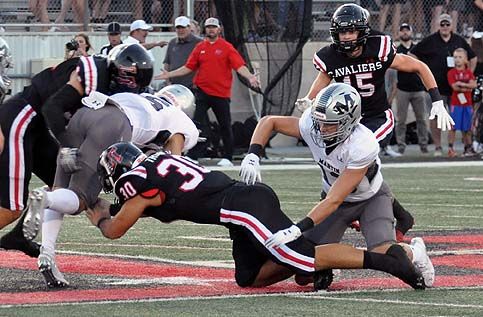 “We got our butts chewed out,” said senior linebacker Maui Trevino.

“It wasn’t the best session, obviously,” echoed offensive lineman Andrew Salem. “We got what we deserved.”

The film study gave the Cavaliers one last look at issues that plagued them Friday night, but the players weren’t the only ones who saw their effort sharply – albeit fairly – critiqued.

“We talk a lot about each game being a test, and it’s our job to prepare them for the test,” coach Hank Carter said Monday. “Well, we all had the study guide that included all the answers, and we still failed. As a coaching staff we have to alter what we’re teaching and the ways that we are teaching so we can get out there on Friday and get the desired result.”

“The stuff that we saw, we should have been prepared for,” Carter said. “I thought we had a good week of practice. We were just too sloppy in our execution, but those are things that we can improve.”

“It’s about our technique, where we are supposed to fit, how we pass people off with our protection schemes and the depth at which we run pass routes,” he explained. “It’s about discipline within the structure of the Xs and Os that we’re doing.”

“It was a lot missed assignments,” Trevino said. “More mental issues than anything else. I think our heads were all in the game, but we just let this stuff happen. That falls on us as the team leaders. The coaches know what they are doing. We just have to do things their way. We’re going to get it fixed. We have to.”

Everyone agrees that they can’t afford to make the same mistakes again when Mansfield Timberview visits Friday night. The Wolves bring an explosive offense that will test Lake Travis’ somewhat injury-depleted defense – starters Nick Villareal and Derrick Johnson were among a handful of key players who didn’t play in the opener and may not play again this week.

Timberview put up 47 points against Bixby (Okla.) last week, but the defending 6A, Division II Oklahoma champions took advantage of four turnovers to pull away for a 77-47 win. Bixby quarterback Mason Williams torched the Wolves’ defense for 435 yards and eight touchdowns, including six to Brennan Presley, who caught 17 passes for 237 yards.

Timberview features a pair of FBS commits, including Texas pledge Jaden Hullaby and Colorado commit Stacy Sneed. Both rushed for more than 100 yards against Bixby, Sneed from the backfield while Hullaby spent time at both receiver and quarterback. They will test Lake Travis’ defense.

“They are wildly talented,” Carter said. “Their offensive scheme is a little simpler than what we saw from Martin, but I think they have better athletes, a bigger offensive line and some really long receivers. They are really talented. No rest for the weary.”

And especially not on Labor Day, which proved to be no holiday for the Cavaliers. Salem called Monday’s practice “the most intense practice we’ve had all year. Friday night was definitely a wake-up call for us.”

Trevino said the practice served to push the proverbial reset button, and he expects his teammates will be much more on task this Friday.

“It’s good when the intensity goes up in practice,” he said. “We get better that way. We can’t change what happened last week, so we have to learn from it and then let it go. We just have to work harder now. We will be ready for Friday night.”