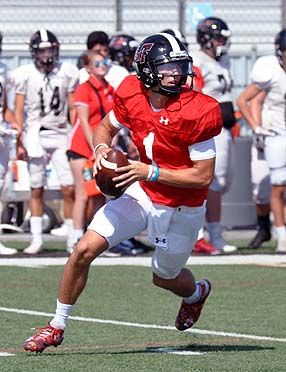 Want to wipe the smile off of Lake Travis coach Hank Carter’s face? Ask him if Hudson Card, who passed for more than 3,500 yards with 50 touchdowns as a junior, might be better suited somewhere else on the football field.

As he took a position-by-position look at the 2019 team in advance of preseason practice, Carter spoke glowingly about his University of Texas-bound quarterback who’d just come off an eye-opening – to some – performance in the finals of the Elite 11 competition. Card turned heads with his arm strength, accuracy, overall ability, and competitiveness.

“I wasn’t surprised at all that he went there and competed the way he did,” Carter said. “But I guess some people were.”

Following four days of competition with 10 of the other top class of 2020 quarterbacks, Card “placed” fourth overall based on all evaluations. When measured, Card threw the hardest pass, clocked at 57.5 miles per hour, and also had the second-best spin rate.

What do those numbers mean?

The velocity indicates that Card can zip a ball into a tight spot, leaving a defensive back little time to react. And if nothing else, it means that Card can definitely – as quarterback coaches and gurus like to say – spin it. Carter didn’t need to see the numbers to know that his quarterback can play the position at an elite level.

“At some point I'm thinking that people will realize that we've had some pretty good players [play quarterback] around here,” Carter said, “and when we say Hudson's going to be in that group with those guys that have come through here, the really good ones, I would hope they would listen.”

Most do, but not all. They look at Card’s 2017 season – when he earned all-state honors as a receiver while backing up Matthew Baldwin – and wonder if he’s better suited catching passes rather than throwing them, that he’s an athlete who’s simply slotted in at quarterback.

“People keep asking me if he’s a quarterback or if he’s an athlete,” Carter says, the smile suddenly gone. “He throws the football as good as anyone in the country and he just happens to be a great athlete on top of that. If he had never thrown a football, he’d still be a Division I player at cornerback, receiver, safety or running back. And he’s an amazing kid.”

Card’s numbers in his first season as Lake Travis’ starting quarterback only strengthen Carter’s belief. In 14 games, Card passed for 3,528 yards with 50 touchdowns and a 68 percent completion rate. Only two other Cavalier quarterbacks – Gilbert and Charlie Brewer – have thrown at least 50 touchdown passes in a season, and they played 16 games in those seasons.

Card added 619 yards and nine TDs rushing, and though he possesses the ability to scramble for big plays at a moment’s notice – he scored on a 48-yard dash through the heart of Austin High’s defense and added a 32-yard touchdown on a fourth-down run against Bowie – he’s content to stay in the pocket long enough to let his receivers break loose. And he has receivers who can break loose. Kyle Eaves, Grayson Sandlin, Max Foit, Jackson Scruggs and Sterling Hupp all made key catches in last Friday’s scrimmage, and Card’s confident they’ll continue to do so as the season progresses.

“Those guys make me look good,” Card said. “Same with our offensive line. They protected well [against Cedar Ridge] and I know they’ll do that throughout the season.”

On the chance that opposing defenses get pressure on Card, the athletic ability that those outside the program – and those inside it – rave about kicks in.

“I think he understands that's an element of his game that makes him different than almost anybody else in the country to me,” Carter said.

ESPN’s recruiting analysts say Card is the country’s second-best dual-threat quarterback behind Longview’s Haynes King, a Texas A&M commit. ESPN also ranks him as the 62nd best prospect in the class of 2020. He’s the 17th best prospect in Texas, according to the American-Statesman’s Fab 55. Rivals.com ranks Card 117th in the country overall and fourth among dual-threat quarterbacks.

“He is a tremendous talent and I’m looking forward to watching him one more year,” Carter said.

With similar numbers in 2019, Card will – from a statistical standpoint – rank in the top 3 of most of Lake Travis’ passing record books. And while the statistical accomplishments will be noteworthy, Card would trade them all to see his jersey framed alongside Gilbert, Baker Mayfield and the Brewers outside Carter’s office. That’s the wall reserved for state championship-winning quarterbacks.

“All those people with their jersey on that wall, they are great players,” Card said. “They are the legends. That would be awesome to get up there and I’m going to work hard to do that.”