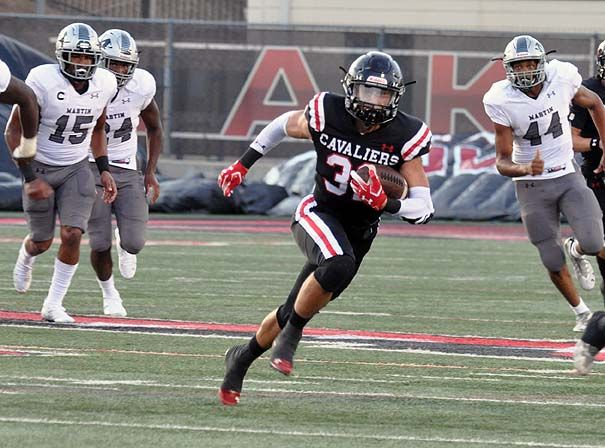 Originally published by the Austin American-Statesman

A long, trying week came to a joyful close Friday night for the Stephens family.

Junior running back Weston Stephens scored two touchdowns – his first of the season – in Lake Travis’ 52-10 win over Bowie. The scores came five days after his parents – Walter and Kelly – and their two dogs, were involved in a frightening accident Monday night.

“We are all very blessed,” Weston said after Friday’s game. “I just wanted to do this tonight for my parents.”

During the accident, the Stephens’ vehicle caught fire. Walter kicked the door open to allow them to escape, along with their dogs. They spent a few hours in the emergency room at the Seton Hospital in Hays before Weston arrived and took them to Lockhart.

“I drove to the site and picked up our dogs,” he said. “Then I went to the hospital, and they didn’t get released until between 11:40pm-midnight. They went to the RV park in Lockhart that we own, where people could look after them. I think we got there around 1 [in the morning].”

After making sure his parents were taken care of, Weston returned to Lake Travis, slept a little bit and resumed his school week on Tuesday. He attended each practice, took part in the Homecoming festivities, took care of the family dogs and hit the ground ready to run Friday night.

“I really think a time like this is when you need your teammates the most,” Lake Travis coach Hank Carter said Friday night. “Your brothers can really help you get through times like that. He was surrounded by his teammates and he got through it. Thank goodness it wasn’t worse. “

After the way the week started, the game – with his parents in the stands – proved therapeutic for everyone. On his first carry, he ran untouched for a 5-yard touchdown to give the Cavaliers a 21-3 lead late in the second quarter. In the third quarter, he gained another 43 yards, capped with a 4-yard run. His 48 yards proved a modest yet meaningful total.

From a football standpoint, Friday’s game marked another step in Weston’s return from knee surgery and started to resemble the player who burst on the scene last season with 884 total yards and 17 touchdowns.

“It felt good to make plays,” he said. “I’m working out my leg every day just trying to get back to 100 percent. It’s been a rough grind.”

For now, the grind can wait. Stephens enjoyed the win with his teammates on the field, but he couldn’t wait to shower and head home.

“I can’t wait to go home and hug my parents,” he said. “It’s weird how life can change like that, just in a snap. You really start to love the little things in life. Thank God they are still here.”