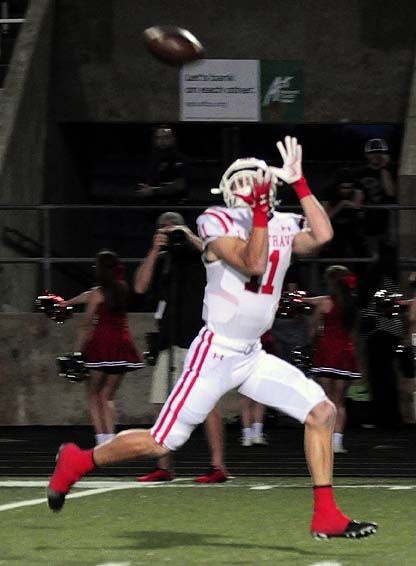 From the time he took over as Lake Travis’ starting quarterback, Hudson Card has had at least two receivers to choose from who could punish opposing defenses.

Last year, Garrett Wilson and Kyle Eaves combined to catch 33 of Card’s 50 touchdown passes, and both gained more than 1,000 yards. Wilson’s since graduated, now showcasing his receiving and return skills as a true freshman at Ohio State. His graduation meant Lake Travis had an opening to fill, and that presented an opportunity for senior Grayson Sandlin to reinsert himself into the mix.

A starter with high hopes at the beginning of last season, Sandlin’s season never really got untracked. He suffered a shoulder early in the season and missed five games. Healthy again, the 6-foot-4 Sandlin continues to grow into a prime role in Lake Travis’ offense.

“He really makes it easy for me,” Card said. “He’s got the speed to beat people deep, and he runs great routes. He can high-point the ball really well, so all I need to do is get it in his area and he’ll make the play.”

After making just one catch a week ago against Akins in a game where the Lake Travis starters were pulled before halftime, Sandlin caught eight passes for 180 yards – both career bests – and two touchdowns as Lake Travis rolled past Austin High 63-0. On the season, Sandlin’s caught 20 passes for 382 yards and six touchdowns. He’s exceeded his yardage and touchdown tally from last year already.

“We knew he has had this potential,” Card said. “Last year, injuries kind of got in the way.”

“It’s hard when some of the games get out of hand,” Lake Travis coach Hank Carter said after the win over Austin High, referring to Sandlin’s lone catch against Akins on Sept. 20. “That game got really out of hand really quickly, but that wasn’t the case tonight. We got to run our offense for a while, and while [Austin High] made some plays against us, we got some things done, Grayson especially.”

“It was a lot of fun to go out there and put on for my team and succeed with my brothers,” Sandlin said. “I have to give the credit to everyone on the offense.”

Of his eight catches, five went for at least 19 yards. A leaping 36-yard catch along the Cavaliers’ sideline converted a third down and 17.

“That was a big play because it set up a touchdown later on the drive,” Sandlin said. “We had gotten in a hole after a penalty and that was a tough situation we needed to play out of. Someone needed to make a play.”

His final catch, a 49-yard catch-and-run touchdown in which he broke a tackle and sprinted for the score, had his head coach smiling.

“The acrobatic catch, that’s something that he does pretty much every week,” Carter said. “But that kind of play, where he breaks a tackle and is really difficult to bring down, that’s the play we need to make. Plays like that will get him to that next level [of playmaker].”

“Our receivers are all capable of making big plays,” Sandlin said. “We are firing on all cylinders right now. I’m really excited about the rest of the season and can’t wait to see how far we can go.”

The next step comes Friday night in Buda when Lake Travis faces Lehman (1-3, 0-1) at Bob Shelton Stadium. The Lobos take on the Cavaliers on the heels of a 52-7 loss at Westlake. Lehman has lost 15 consecutive district games dating back to 2016 and has never beaten Lake Travis.