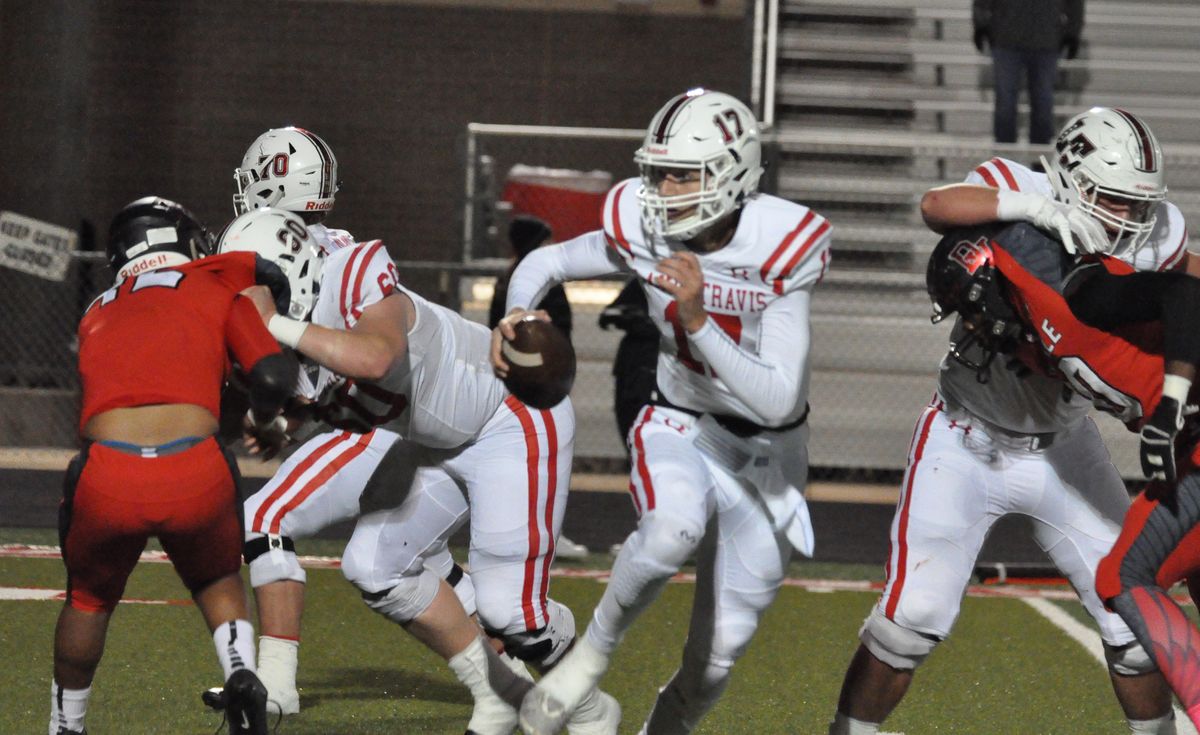 Friday will be a busy night at Cavalier Stadium.

Before the Cavaliers’ final home game against Hays, the team will honor its seniors. At halftime, the school will celebrate the 10th anniversary of the 2009 team’s 4A, Division I state championship.

And between the pomp and circumstance, Lake Travis will look to remain unbeaten in District 25-6A play against a Hays team that had won its first seven games before running into Westlake last week and falling 65-7. Lake Travis coach Hank Carter says don’t be fooled by that result.

“I think Hays is better than they were last year,” Carter said. “Last week was not an indication of how good Hays actually is.”

The Rebels operate a slot-T offense that relies on quick handoffs with plenty of misdirection. Led by Xavier Green, Joeangel Carrasco and Durand Hill, the Rebels have run through opponents to the tune of 342 yards per game.

“That will be a big test for our defensive line,” Carter said. “We need to be disciplined and physical.”

And the Cavaliers need to keep the Rebels behind the chains. While the Rebels run the ball effectively – Hill gives them a bit more of a running threat than they’ve had at quarterback in previous years – they only average 68 yards per game passing, and Hill managed just 13 yards through the air against Westlake. The offense will be unlike anything the Cavaliers have seen yet in 2019.

“In the past, we’ve seen some teams that have run components of this system, but not this year,” Carter said. “This is a tough scheme to line up and play. If they can get three or four yards a play, they are happy, and then they can lull you to sleep and hit a big play behind you.”

Green is the one exception to the four-yards-and-a-cloud-of-dust theory. He’s gained 1,000 yards on the season and averages 9 yards a carry with 12 touchdowns.

“I think we were just a little too sloppy,” he said. “We need to be sharper with our protection on Friday.”

While Nate Yarnell completed 13 of 20 passes for 224 yards and two scores, he also had to scramble more than Carter liked, and both of his interceptions came on ill-advised throws while he was forced from the pocket. Carter expects that Yarnell will eliminate some of the mistakes and be more comfortable in his second start, but the coach says the rest of the team has a role to play as well.

“It will help him if we are better up front,” Carter said. “Everyone needs to do their part to make life better for him.”

Hays’ primary weapon in the passing game is junior Bryant Lewis, who played his first two seasons at Lehman. Small in stature, he’s been a big-play waiting to happen. He averages 24 yards on his 10 catches and 19 yards on seven carries. He’s also returned a kickoff for a touchdown.

Barring a week 10 upset, the winner of Friday’s game will be the top seed from District 25-6A in the 6A, Division I playoffs. That means a home bi-district playoff game, most likely against Smithson Valley. The second-seed travels to face undefeated and seventh-ranked Converse Judson.

At halftime Lake Travis will celebrate the 10th anniversary of the 2009 state championship team, which beat Longview 24-17 at Baylor’s Floyd Casey Stadium. Chad Morris, who coached Lake Travis to 32 consecutive wins, capped by that game, before moving on to the college ranks, was recently elected to the Texas High School Football Hall of Fame. He will be inducted May 2, 2020 at the Ferrell Center in Waco.