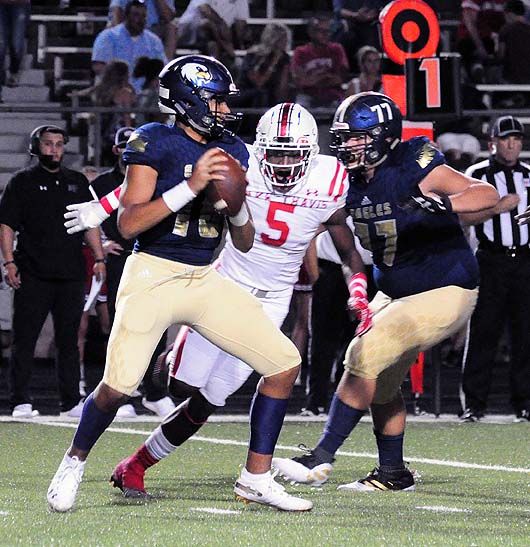 Defensive end Trey Sofia had three quarterback sacks and Trey Wright added a fourth as the Cavaliers (3-0, 2-0) recorded their first shutout since 2017.

“I don’t think they were prepared for our speed on the edge,” Sofia said. “There were times when we were able to push the offensive linemen into the quarterback and other times when they just couldn’t touch us.”

“It was a good night and we did a lot of really good things defensively,” Lake Travis coach Hank Carter said. “Trey [Sofia] and Trey [Wright] are playing really well, and whenever those guys are playing fast, they are a pretty tough matchup.”

Akins threated to score just once. The Eagles used most of the third quarter to drive to the Cavaliers’ 1-yard line before faltering. On third down, Nathan Davis fumbled and Charlie Cross recovered it and returned it to the Akins 4 to preserve the shutout.

“We hadn’t had a shutout in a while and it got a little nervous there for a while, but Charlie came up with that scoop, almost for a score, and that was big for us,” Sofia said. “It was good for our team that we got a shutout.”

While the Eagles (1-3, 0-2) struggled offensively throughout the night, Lake Travis scored early and often, taking advantage of short fields on three different occasions. Kyle Eaves returned the opening kickoff 87 yards to set up a 6-yard touchdown run from Marcelo Alanis. Alanis capped an 18-yard drive two plays after Akins’ fake punt attempt from deep in their own territory failed.

The Cavaliers led 28-0 after the first quarter and 42-0 at the half as Weston Stephens and Wesley Erwin added touchdown runs. Erwin’s touchdown came in his season debut. He missed the first three games after injuring his ankle in a preseason scrimmage.

Hudson Card completed eight of nine passes for 135 yards and two scores before coming out of the game before halftime. He connected with Grayson Sandlin for a 56-yard score in the first quarter and found Sterling Hupp for a 10-yard score in the second quarter two plays after Dax Batchelor blocked an Akins punt.