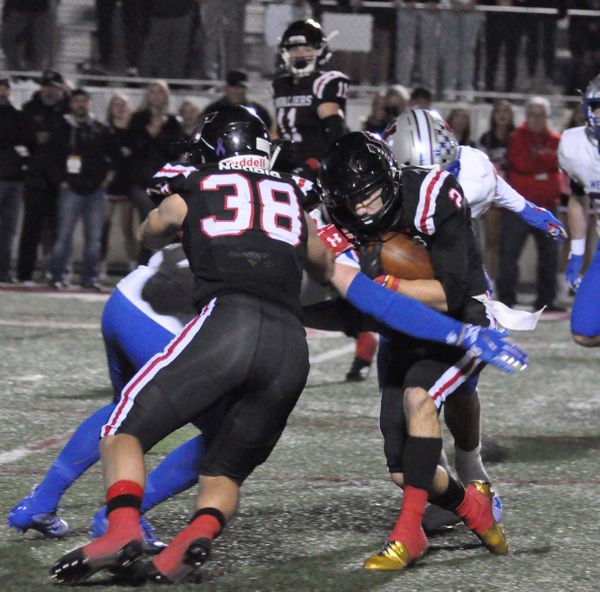 Late in Friday’s back-and-forth Battle of the Lakes, Lake Travis found itself trailing Westlake 25-19 and facing a third and six at the Westlake 39.

Lake Travis quarterback Hudson Card surveyed the Westlake defense and didn’t like what he saw, but the process of calling an audible took too long for head coach Hank Carter, who called timeout before the snap. On the sideline, Card and offensive coordinator Will Stein talked about their options and agreed on the perfect play.

Pass to Kyle Eaves, who’d already caught two touchdown passes? Nope. How about Grayson Sandlin, who’d caught 10 passes to that point? Not him either.

“How about that play?” Carter said afterward.

Stein dipped into his bag of tricks and had sophomore Isaac Norris take a pitch and throw a pass to Card as he leaked out of the backfield.

“We’d been working that play for a couple of weeks,” Stein said. “Coach [Carter] had been telling us to make sure we were working on these ‘third and gotta-have-it’ plays. I felt like at that moment it was something that we had to have.”

It happened in a flash. Card took the snap and handed the ball to Eaves, who’d come in motion across the formation. Eaves pitched it backwards to Norris, who rolled to the right and lofted a pass toward Card, who spent his sophomore season earning all-state honors as a receiver while backing up Matthew Baldwin.

“To give a guy who’s played quarterback at Lake Travis [Norris was a freshman quarterback last year] to throw it to a guy who’d played wide receiver, it was like ‘why not?’” Stein said.

Norris played quarterback as a freshman and was set to be a quarterback this year before tight end Lake McRee suffered his season-ending injury. At that point, coaches looked at Norris’ size and ability and moved him into a hybrid fullback/tight end role to help depth at that position.

“He’s a smart, tough, dependable football player who can run, block and catch,” Stein said of Norris. “It was critical play and he’s the type of kid who doesn’t blink when it comes to pressure.”

“They called it, and I was ready,” Norris said. “I just tried not to give it away. I was trying not to look in the backfield too often before the snap, and then I got tossed the ball. I threw it, and at first I thought I’d thrown it a little too far.”

Turns out he shouldn’t have worried at all.

Card calmly stretched for the pass, corralled it and gained just enough for a first down to keep the drive alive.

“Hudson can run it, he can throw it and he can catch it,” Carter said. “He made a great play and what a great throw by Isaac.”

After his catch, Card went back to throwing the ball. A defensive holding call wiped away a potential Westlake interception, and Card hit Eaves for 14 yards and then delivered a perfect alley-oop pass that Sandlin snared above Westlake’s Lucas Mireur for the winning touchdown.

“He’s just a baller,” Carter said of Sandlin, who’s caught a touchdown pass in each of the last four games. “His catch radius, his size, how tough he is. He was pushing their DBs around even after the catch tonight. I’m so proud of him.”