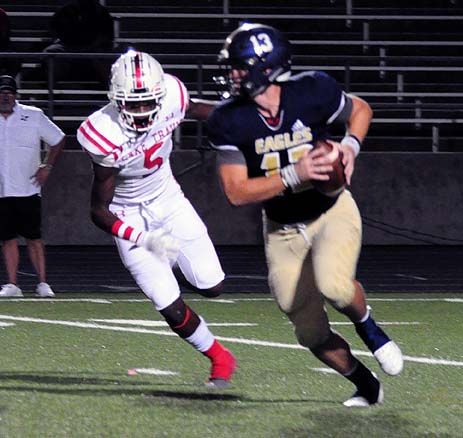 A season’s worth of expectation came to fruition last Friday at Burger Stadium, where Lake Travis’ defensive ends kept Akins from mounting any significant offensive threat.

Trey Sofia (three sacks) and Trey Wright (three tackles for loss, one sack) spearheaded an effort that resulted in Lake Travis’ first shutout since 2017, something the starters had to stand by and watch as the reserves thwarted Akins’ best chance.

“It was good for our team that we were able to get the shutout,” Sofia said.

Sofia’s sacks give him a team-high five on the season to go along with 24 total tackles, which ranks second behind linebacker Maui Trevino’s 30. Wright has 20 tackles and five tackles for loss, both of which rank among the team leaders as well.

“Those guys are playing fast and anticipating really well,” Carter said. “They are a pretty tough matchup.”

Sofia and Wright entered the season with high expectations, both for the team and of themselves. The seniors knew they’d be counted on to disrupt opposing passing games, and they’ll get their best test of the season when Austin High visits.

Before last week’s 63-8 loss to Westlake, the Maroons averaged better than 40 points per game. Junior quarterback Charles Wright, an all-district pick last season, has passed for 974 yards and 11 touchdowns in four games after passing for 2,800 yards and 26 touchdowns (including three against Lake Travis) last season.

If Lake Travis is going to slow Charles Wright down, both Trey Wright and Sofia will have to find success rushing against Austin High’s offensive line. They know the task at hand and just want to continue to get better.

“We’re just trying to get better every week, do better than we did last week,” Wright said.

The plan is simple, Sofia said, and it’s not unique to Austin High.

“We want to slow the things that they do well and really expose and take advantage of the things they don’t do well,” Sofia said. “We’re just trying to get better.”

Carter said both Trey Wright and Sofia used their speed to their advantage against Akins. Both are tall – Sofia stands a lanky 6-foot-5 and is still adding to his 215-pound frame. Trey Wright’s slightly shorter and lighter than Sofia, thought that’s not surprising for someone who spent his first two years playing receiver and defensive back. They know Trey Wright’s speed gives offensive linemen fits, and though he’s bulked up some, he still has the speed to chase quarterbacks who try and escape the pocket, as he did with Timberview’s Jaden Hullaby.

“When he comes off the line and hits his spin move or hits him with a jab step, there aren’t a lot of tackles fast enough to recover,” Sofia said of Trey Wright. “He can get to the quarterback in a split second.”

Sofia’s also got speed to get around offensive tackles, and Trey Wright admires his ability to quickly get into the backfield.

“He just plays fast,” he said. “There are times where he’s been back there so quickly we’ve run into each other.”

It’s a place they hope to continue to meet as the Cavaliers look for a third straight District 25-6A win.