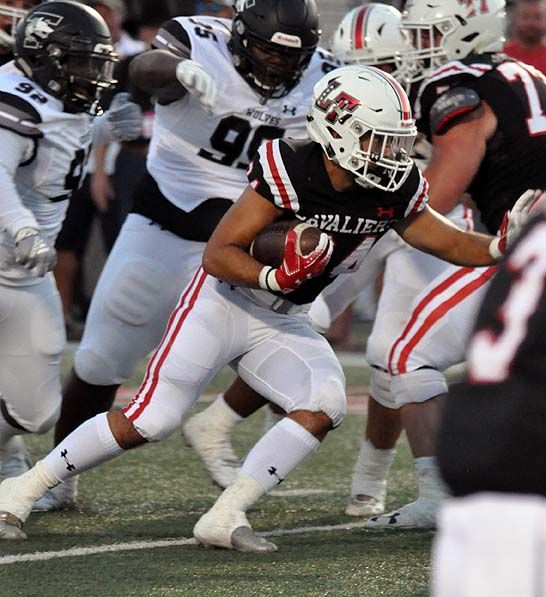 Originally published in the Austin American-Statesman

Lakeway – Marcelo Alanis rushed for a career-high 164 yards and a touchdown, and Lake Travis’ defense forced four turnovers in a 48-26 win over Mansfield Timberview.

Alanis’ running keyed Lake Travis’ offense throughout the game. His 49-yard run late in the second quarter helped the Cavaliers answer a Timberview score, setting up Hudson Card’s 8-yard touchdown pass to Grayson Sandlin. His 43-yard touchdown run in the fourth quarter put the game out of reach.

“It’s all a team effort and I can’t thank the offensive line enough,” Alanis said after carrying the ball 25 times. “It was such a fun night. We practiced hard all week, and it’s amazing when a total team effort comes together.”

When Alanis wasn’t running through Timberview’s defense, Card was passing over and around it. He connected with Kyle Eaves for an 80-yard score on Lake Travis’ first play of the game and finished with four touchdown passes. He also added a 67-yard touchdown run immediately after throwing an interception that Timberview’s Demondre Green returned 72-yards for a touchdown in the third quarter.

Despite giving up a pair of long touchdown runs in the first half, Lake Travis’ defense kept Timberview’s Jaden Hullaby bottled up. Hullaby, an athlete committed to the University of Texas, rushed for 90 yards on 18 carries, but he lost a pair of costly fumbles and never broke free for a big play. Colorado-bound Stacy Sneed burned the Lake Travis defense for 76 yards on his first two carries but managed just 24 yards on his final seven carries.

“A lot of times tonight we played our defense correctly, but they’ve got excellent players and they will make you look silly every now and again,” Lake Travis coach Hank Carter said. “And they certainly did that at times.”

Card completed 13 of 23 passes for 261 yards and the four touchdowns spread between Eaves, Sandlin and Sterling Hupp.

Eaves caught six passes for 191 yards and two scores, both of which came during a stretch where the Cavaliers scored 20 consecutive points. After Eaves’ 80-yarder gave Lake Travis a 7-6 lead, Hays McCannon kicked an 18-yard field goal late in the first quarter and added a 31-yarder in the second quarter. Eaves set up his own 3-yard touchdown catch with a 42-yard catch-and-run later in the second quarter.

Sneed’s 53-yard touchdown run cut Lake Travis’ lead to 20-12 with 1:44 left in the second quarter, but Lake Travis pushed the lead back to 15 points thanks to Alanis’ 49-yard run, which sparked an 88-yard drive to close the opening half.