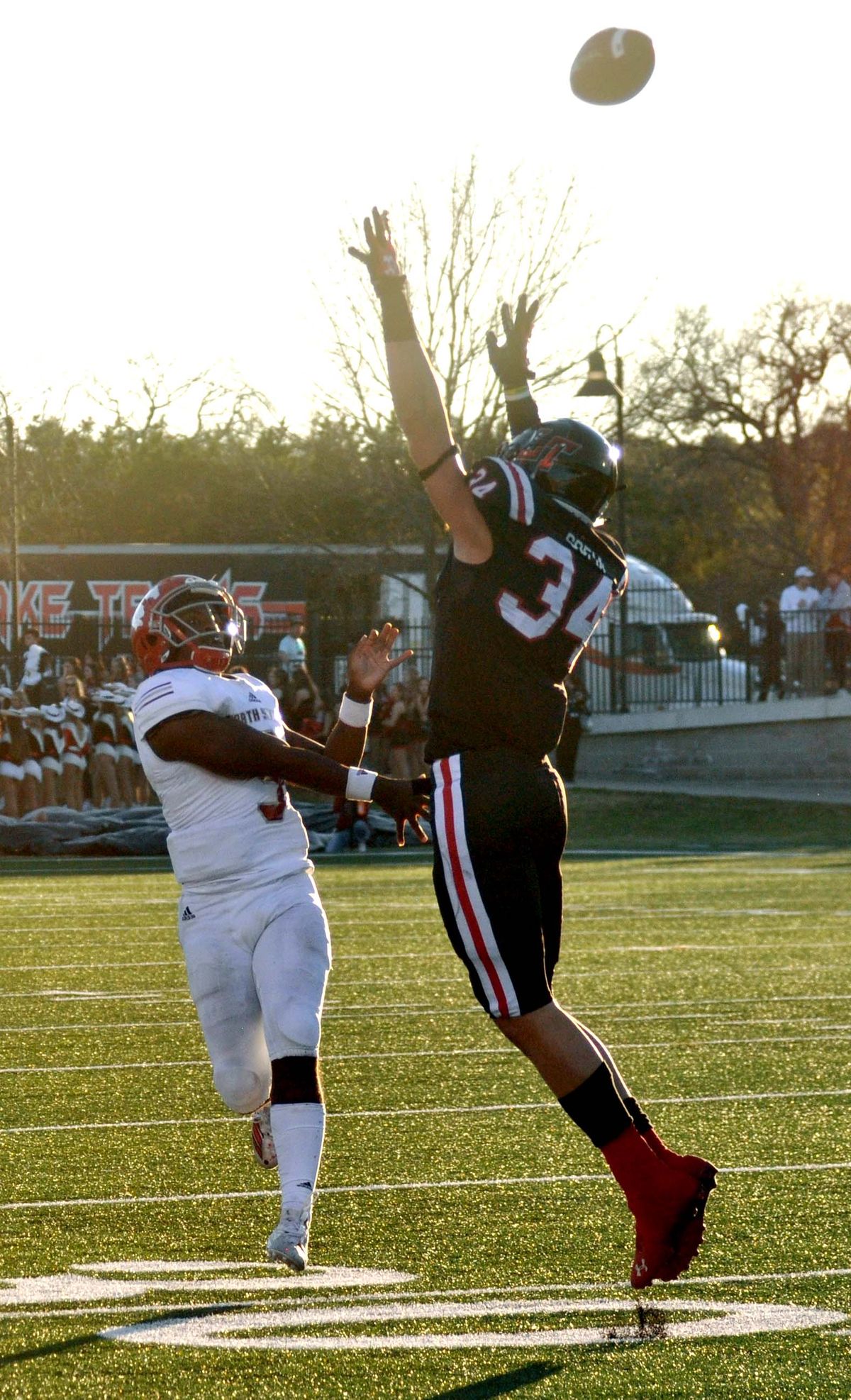 “I’m really proud of the way that we rallied and made it a game,” said Lake Travis coach Hank Carter, “but our program is not one of those where we are looking for bright spots. We know the things we need to do if we want to be a championship team, and we’ve got to be able to do them against big, strong and fast guys.”

For all of its fast guys, North Shore leaned on big and strong during a methodical first half. Usually a quick-strike team, the Mustangs put together a trio of long drives while scoring touchdowns on all four possessions to take a 28-3 halftime lead.

“At the end of the day, we just couldn’t stop them,” Carter said. “We couldn’t make key stops when we needed to. A lot of that was due to them being really, really good. We also had a couple of miscues. We needed to be exactly right at the right time, and we weren’t.”

And as they did early in the regional championship game against Converse Judson, the Cavaliers struggled after getting a Hays McCannon field goal on their opening possession.

“There were some plays to be made, and we just got moved off of our spot a couple of times due to their pressure,” Carter said. “We had some open guys, but we didn’t have quite enough time to get it to them.”

After some halftime adjustments, Lake Travis threw all caution to the wind and Hudson Card started flinging the ball around the field.

“We made note of a few things that we liked in the first half but just weren’t able to capitalize on,” Carter said. “We used that and put together some scoring drives in the second half. We didn’t want to leave any tricks in the bag, and we had a lot of designed plays to get free in the man coverage they tended to play. Hudson did a good job of finding the open guy and a lot of guys made a lot of plays.”

Twice the Cavaliers pulled within 11 points. Card connected with Grayson Sandlin and Sterling Hupp for third-quarter touchdowns to pull within 35-24 only to watch North Shore rebuild a 49-24 lead in the fourth quarter. Card and Weston Stephens added touchdown runs to close the gap to 49-38, but North Shore recovered a final onside kick -- the last of three it would recover -- and ran out the clock.

“I’m proud of the way we responded, but I would expect our kids to respond that way so I wasn’t surprised,” Carter said. “I feel like we had our chances. If we could have gotten a few more stops and made a couple of plays, then maybe it could have been a different outcome. It could have been us. But it wasn’t.”

And with the loss comes the finality of the season. For underclassmen who played key roles – Stephens became the school’s first 1,000-yard rusher since 2014; Nate Yarnell stepped in and went 6-0 at quarterback while Card recovered from a knee injury; D.J. Johnson emerged as a defensive leader; Lake McRee, Marcelo Alanis and Trey Dorsett should all return from knee injuries – there’s still an opportunity (or two in Johnson’s case) to make another run at a state championship.

For Card, linebacker Maui Trevino and defensive ends Trey Sofia and Trey Wright among others, college football awaits. For others, though, Saturday marked the end of an athletic journey.

“That’s what we think about a lot as coaches,” Carter said. “How many of those guys played the last football game they are ever going to play on Saturday? That is so tough. A lot of the guys who have played their last game are just as integral as the guys who are going to go on and play in college and maybe even the pros. Those were guys who put us in a spot where with a couple of stops or scores, we’re playing in the state championship game. It’s certainly a bummer.”