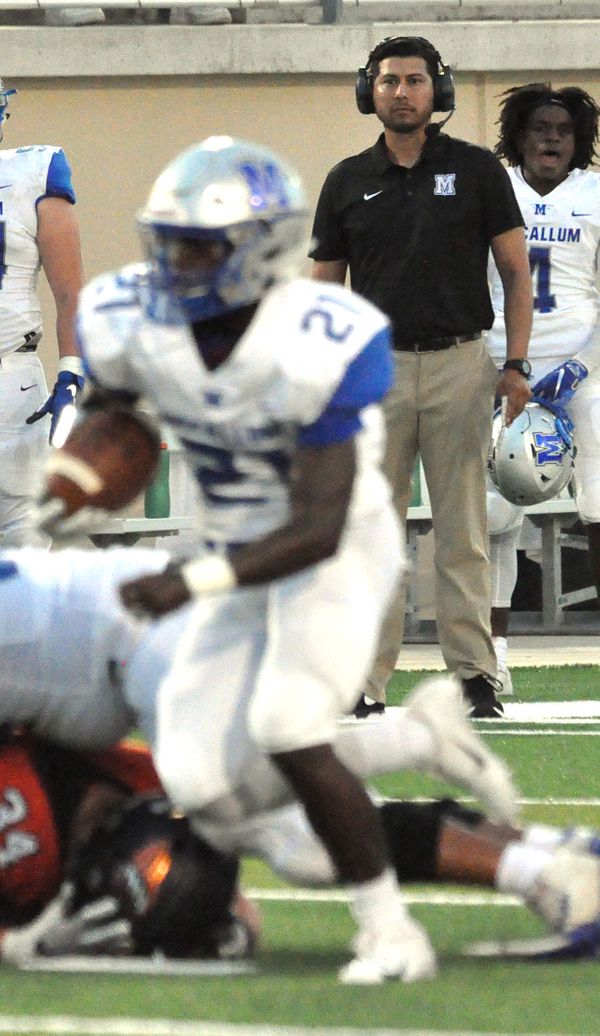 Jacob Alvarez and Curtis Clay now have a third common tie in their football careers.

The longtime friends from Lockhart played two years together at Lockhart High School with Alvarez throwing passes to Clay. They both landed on the coaching sidelines in nearby District 12-5A Division I – Clay coaching receivers at Lanier before moving to LBJ while Alvarez served as offensive coordinator at rival McCallum. Now, they have Lake Travis in common, at least on paper.

“It’s just one of those things where we’ve always seemed to find each other since we left Lockhart,” Alvarez said. “We kept in touch and it’s kind of interesting that we both found our way out to Lake Travis from Austin ISD.”

Clay stepped down as the Cavaliers’ wide receivers coach this spring, and Alvarez will fill the vacancy once the employment paperwork becomes official. The McCallum High School journalism department announced Alvarez’s departure on Tuesday.

“We actually interviewed coach Alvarez for an opening a few years ago but the teaching field didn’t work out,” Lake Travis coach Hank Carter said Wednesday. “He really impressed us then, and when [coach Clay] announced he wouldn’t be back, he reached out to us again.”

While Clay brought a wealth of playing experience to the Lake Travis sidelines -- he played at TCU and spent a year with the Dallas Cowboys before entering coaching – Alvarez took a more direct route to swapping his helmet for a coach’s headset.

“He was a much better football player than I ever was,” Alvarez admitted.

Carter said the Cavaliers will lean on Alvarez’ coaching experience to work with a deep receiver group that includes Kyle Eaves, Grayson Sandlin and Lake McRee.

“He may not have the same playing experience that coach Clay had, but he’s been a coordinator for a team that made a long playoff run,” Carter said. “Most importantly, he’s a great person who knows how to communicate with kids and motivate them, and that’s the hardest part of a coaching job. We feel like he’ll be able to hit the ground running.”

Alvarez spent five seasons at McCallum, working with the Knights’ receivers for three seasons before coaching quarterbacks and coordinating the offense for coaches Charles Taylor and Thomas Gammerdinger. In 2017, McCallum reached the 5A, Division I state semifinals, won 14 games and scored 47 points per game.

“I will miss coaching at McCallum,” Alvarez said. “I worked with and learned from a lot of great coaches, and the kids really bought into what we were doing, the 2017 team especially. That was a very tight group that managed itself and made it so we only had to worry about coaching football.”

While McCallum found much of its offensive success by running the ball, Alvarez knows the opposite is true at his new home.

“We’ve run the ball for a while at McCallum and done a really good job,” he said. “It’s the opposite here at Lake Travis. For me it just comes down to learning the [offensive terminology] and being really good with the details. If we can do that, we will continue to have a lot of success.”

He knows football at Lake Travis brings different expectations than most other places, and he’s excited for the opportunity.

“I know there are high expectations,” he said. “We are going to work hard to get back to where we want to be, which is playing for the state championship.”

Alvarez isn’t wasting time getting prepared for the 2019 season.

“He came in and met with [offensive coordinator Will] Stein and he felt like it was a great fit,” Carter said. “We want him to use his overall offensive experience and work with our receivers. It’s a talented group, but we want to get them to play tougher, be more precise. These are the same things we’d want Coach Clay working with them on if he’d have stayed.”