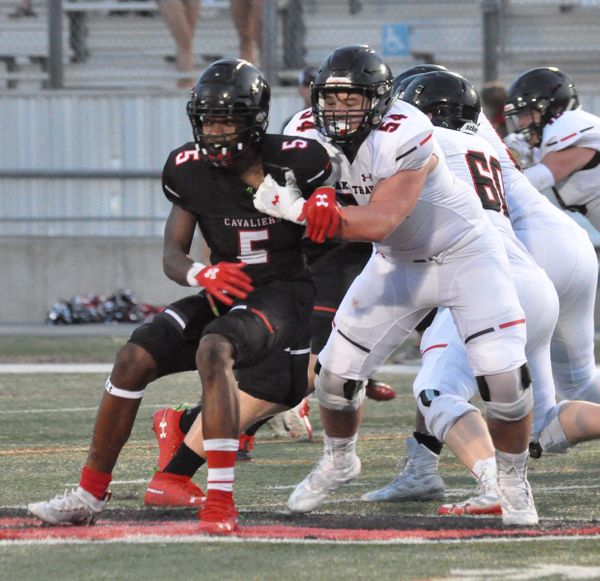 Aug. 8 - Preseason practice begins Monday, and as Lake Travis begins another quest for a state championship, here are five things to watch as pads start popping.

Walking out of NRG Stadium following the semifinal defeat to Galena Park North Shore, Cavaliers coach Hank Carter knew his team’s off-season weight training would be key. By all accounts, his players hit the weight room hard. According to strength and conditioning coach Tanner Jacobs, the Cavaliers made huge strides from the spring through the summer. At the end of spring workouts, 8 players could lift a combined 800 pounds on what Jacobs calls foundational lifts (squat, bench press, clean). By the end of summer, that number had grown to 29. Five of those players surpassed the 1,000-pound mark.

“Working as hard as they did does two big things, I think,” Carter said. “It strengthens just the way that the kids respond to one another, but it also they get to see, ‘hey I've been busting it and my body looks a lot different, I'm bigger and broader and stronger,’ and that gives a lot confidence going onto the field.”

With Garrett Wilson impressing at Ohio State, Lake Travis will not have the obvious go-to receiver in big moments. While Wilson stood out, Hudson Card proved equally willing to spread the catching wealth among a deep group that included Kyle Eaves, Grayson Sandlin, Lake McRee, Sal Alanis, Cortland DeNisio and Jeremiah Patterson. While Eaves, Sandlin and McRee were Card’s primary targets in the spring game, the Cavaliers want to develop the same type of depth.

“I think we’re going to have the same type of depth,” Carter said. “We’ll look at guys that either were hiding on defense or weren't on varsity.”

Defensive backs Aden Nava and Max Foit got plenty of looks on offense in the spring, and varsity newcomers Jackson Scruggs and Chrenet Estes could also make their way into the rotation. Sterling Hupp battled injuries throughout the spring but saw varsity action in 2018.

Head athletic trainer Brandy Gothard has seldom been as busy as he was in 2019. The list of key players who missed multiple games included OL Andrew Salem, RB Sean Brown-Nixon, RB/LB Wesley Erwin, Sandlin, McRee, Wilson and DL Kaleb Wenson. Part of the weight room emphasis was to better minimize the chance for injuries, but Carter knows that’s not a foolproof plan. He just hopes this team, as has been a hallmark of the school’s championship teams, can avoid the injury bug.

“That’s a lot of what we do in the weight room,” Carter said. “It’s tough to avoid every type of injury during the season, but being bigger, stronger and more flexible helps.”

Perhaps the Cavaliers’ biggest concern heading into the 2019 season remains depth – and size when matched up with North Shore’s mammoth offensive front – along the defensive front.

“I think that's probably an area of concern just because we lost a lot of experience there and we aren’t as big,” Carter said.

Raleigh Erwin returns as a junior to anchor the middle of the line, and a group that includes Riley Colliau, Austin Spille and Jayden Nguyen took turns at defensive tackle throughout the spring. Trey Wright and Trey Sofia stood out at defensive end and will give the Cavaliers a pair of long speed rushers on the edges.

After a 10-game winning streak, Lake Travis suddenly finds itself having dropped two in a row to their neighbor-rivals. The Cavaliers pride themselves on taking the season one week at a time, but even the head coach understands that everyone, and he means everyone, wants to talk about Westlake all the time.

“My mom even asked me the other day, ‘so are we going to beat Westlake this year?’” Carter said in late July. “Yes, mom, we’re going to play better and we’re really going to try to beat them.”

Still, Carter will try and keep his team focused on the task at hand and deal with Westlake when that week arrives.

“Obviously when we play Westlake, that's great for the two schools and community and oftentimes has district and playoff ramifications,” Carter said. “But you know, we're excited about getting ready to start the season and getting ready for Martin.”