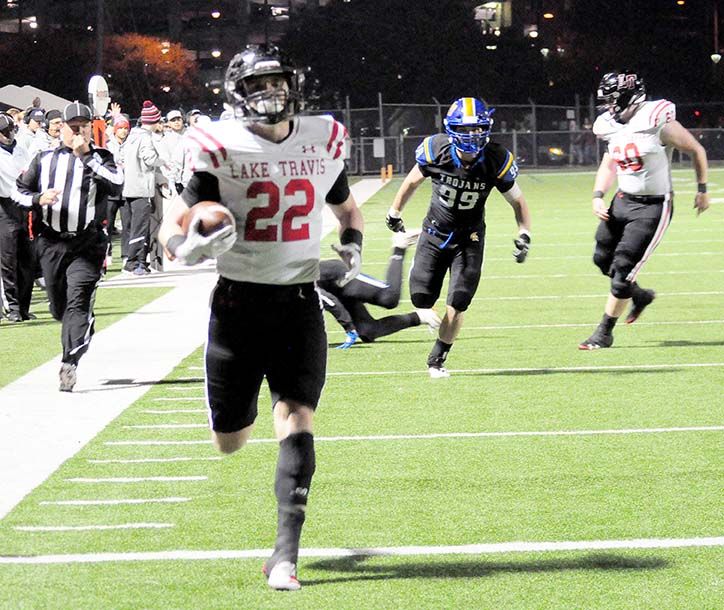 Wesley Erwin rushed for 98 yards and scored three first-half touchdowns to spark Lake Travis to the District 25-6A title with a 49-14 win over Anderson at House Park.

The win gives Lake Travis (9-1, 8-0) its first district title since 2016. Anderson (6-4, 4-4), which needed to win to advance to the playoffs, couldn’t overcome the absence of starting quarterback Carsten Groos, who missed the game with an injury, and running back Colin Page, who injured his knee returning a first-quarter kickoff.

Erwin ripped off a 36-yard run on the first play of the game and gave Lake Travis a quick 7-0 lead with an 18-yard touchdown. Anderson drew even thanks to its defense. Syncere Turner intercepted Nate Yarnell’s pass and returned it 35 yards for a touchdown.

But Lake Travis bounced back quickly. Yarnell completed his next pass – a 54-yarder to Cade Bortle – and the Cavaliers scored the next 42 points. Erwin scored on another touchdown run and added an 11-yard touchdown catch. The junior, who has battled through a series of injuries, was happy to do his part to help the Cavaliers reclaim the district title.

“It was great to get out here and do my part,” Erwin said. “Our offensive line did an insane job tonight.”

Erwin became the third different Cavalier running back to approach 100 yards, joining classmates Marcelo Alanis, who tore his ACL earlier, and Weston Stephens. Junior Gary Gordon chipped in Friday night with 69 yards in the second half.

“It’s a blessing to have such a deep running back room,” Erwin said. “I feel like all of us could start at other programs, but it’s an amazing feeling getting to play with guys who all agree that we just want the guy who is playing the best at that time to play. We all push each other and try to rise to the occasion.”

Without Groos and Page, Anderson struggled to move the ball. The Trojans gained just 49 yards in the first half. Coach Daniel Hunter turned to freshman quarterback Fred Dale in the must-win game. Until a third-quarter interception that Watson Cusick returned for a Lake Travis touchdown, the freshman played a clean game but struggled to get the ball downfield, passing for just 60 yards. Grose Kiel, who made a one-handed grab for a 22-yard touchdown late in the game, managed just 52 yards on seven catches.

Lake Travis will host Smithson Valley in the 6A, Division I, Bidistrict playoffs next Friday at 7:30.