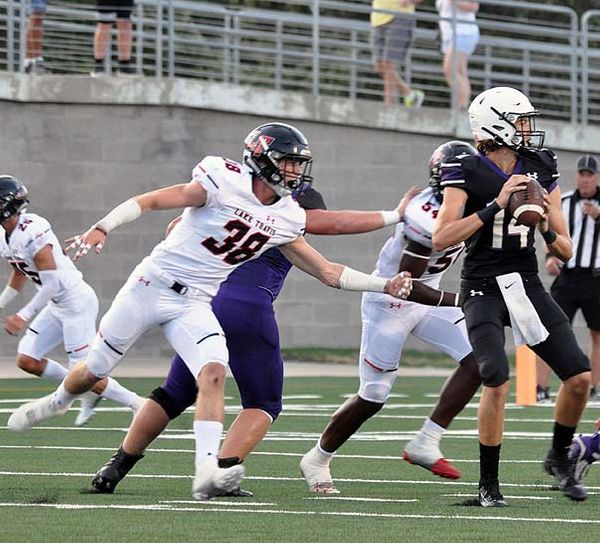 “I thought our defense flew around to the football and we tackled pretty well,” Carter said. “I think there’s a lot of things that we are happy about with the way we played.”

Heading into preseason practice, Carter and defensive coordinator Ryan Luedecke liked the depth that has emerged at key positions, especially in the back seven – the linebackers, rovers and defensive backs. During Friday’s scrimmage, coaches rotated multiple player groupings in during the first-team sessions, and Carter hinted that the rotation will continue, making the designation of “starter” less relevant.

“Outside of [senior linebacker] Maui [Trevino], we’ve got a lot of kids who are really close to one another with their skill level,” Carter said. “We’re going to send players out there with the first group, but we’re going to rotate regularly unless we see that someone is consistently making a lot of plays and then we’ll stick with the hot hand.”

Here’s a position-by-position look at how the defense shakes out heading into Friday’s season-opener:

Developing depth along the line, and especially the interior, has been a primary focus as the Cavaliers plan for what they hope becomes a long season. Junior Raleigh Erwin returns after starting as a sophomore, leading a group that includes Riley Colliau, Jayden Nyguen and Austin Spille. On the outside, Carter expects a trio of Treys to make things happen. Seniors Trey Wright and Trey Sofia have given opposing blockers fits with their size and speed. Sophomore Trey Dorsett provides depth.

Carter says: “We’ve got four or five guys who we’re going to rotate quite a bit at defensive tackle, probably even more than we did in the scrimmage.”

Trevino’s been a mainstay of the defense for two seasons and will use his experience and explosiveness to lead by example. An intelligent and athletic group will play alongside, led by seniors Tag Humble, Nick Villareal and Charlie Cross. Humble and Villareal have swapped roles in 2019 with Humble playing alongside Trevino as an inside linebacker while Villareal moves to the hybrid rover position. Sophomore Watson Cusick, who also figures in the mix at running back, has been a preseason bright spot as well.

Carter says: “We moved Nick to take better advantage of his speed, and Tag is just tough as nails. He’s developed into one of our leaders and one of our better players. We’re just trying to put these guys in spots where we can best use their skill-sets.”

Like Trevino, Copeland Gothard will be a three-year starter at cornerback, and starting safety Ife Ohalete also returns. They’re the most experienced players among a versatile group of players that include sophomore Derrick Johnson -- who’s expected to start alongside Ohalete, Aden Nava, Cyrion Morrison, Jacob Hopkins and Cam Correa. And if injuries crop up or the team finds itself in a big spot, receiver Kyle Eaves could also be called upon to play a corner spot.

Carter says: “It seems like a lot of these guys have been with us for a while and know our system. Some of them are playing different spots, but I think their experience will help. I feel like we have a solid two-deep with the guys at outside linebacker, safety and corner.”

Junior Hays McCannon returns after a solid sophomore season, but classmate Nathan Ellisor, who’d handled the kickoff and longer field goal duties, was lost during the team’s spring game with a knee injury. McCannon will continue to handle the placekicking duties after a solid summer that’s seen him improve his range, and Hudson Card will continue to handle the punting chores. Senior Kaleb Halfmann enters his second year as the long snapper, where Carter said he’s developing into a college prospect. Eaves, Johnson and Max Foit are the early front-runners to return kicks and punts.

Carter says: “I hated losing Ellisor in the Spring Jamboree because he’d had a great spring and I felt like we’d have the same set-up we had last year, plus those guys would be pushing each other each week in practice. But Hays has gotten bigger and he’s kicking the ball further than he did last year.”