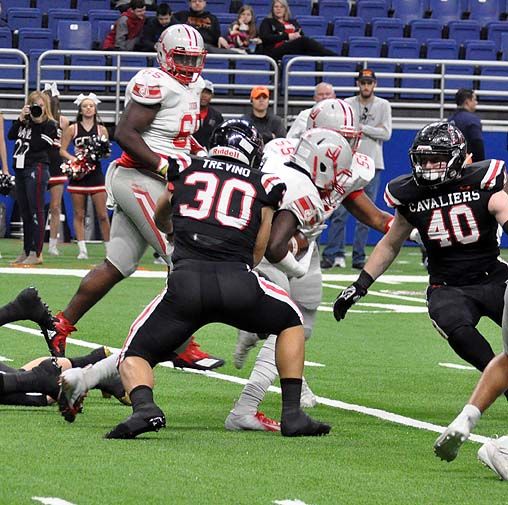 After North Shore ran away from Atascocita 76-49 and Lake Travis soared past Converse Judson 48-35, neither coach seemed thrilled with their respective defensive performances. Both agreed, however, that when plays needed to be made, each defense stepped up.

“That’s playoff football,” Kay said. “It’s not going to be about the stat sheet. It’s about getting key stops when you need to get the key stops.”

North Shore’s defense came up big in the second quarter, helping the Mustangs turn a 21-14 deficit into a 41-21 lead. For Carter’s Cavaliers, keeping Judson off the board in the second quarter and into the third allowed the offense – with quarterback Hudson Card playing for the first time since Oct. 11 – to find its footing and shred the Judson defense.

“There were times in the game where we didn’t tackle well,” Carter said. “Part of that was poor execution on our part, but at the same time they were really good. Their kids were fighting hard and are great in space. We got a couple of stops and came up with some turnovers when we needed them.”

Judson’s duo of Mike Chandler II and De’Anthony Lewis found running lanes early and late, but the Cavaliers bottled them up during a mid-game stretch that allowed Lake Travis to figure things out offensively.

“I think that was some of the most physical football our defense has played,” defensive end Trey Sofia, who made eight tackles, said.

“The defense gave our offense time to bounce back from two turnovers, and the sack at the end of the first half was big,” Carter said.

“I think we got a lot of momentum going into the half,” Sofia said. “We had kind of figured out their offense and were stopping them and that allowed our offense to do what it can do.”

After taking a 14-3 lead, Judson gained just 113 yards over the course of the second quarter and into the third. Maui Trevino (19 tackles) and Tag Humble (10 tackles) led the Lake Travis effort, along with defensive tackle Raleigh Erwin (10 tackles).

“Early in the game we were playing the way we thought we should, but then we started listening to our coaches a lot more and were able to react to that,” Erwin said.

While Judson’s offense sputtered, Lake Travis took off. Kyle Eaves’ 56-yard catch-and-run touchdown gave Lake Travis a 17-14 lead less than two minutes into the third quarter and further energized a defense that settled down after a slow start.

In the first 8 minutes of the third quarter, the Lake Travis defense held Judson to just 24 yards of offense and forced punts on both possessions. During that time, Lake Travis had finished turning a 14-3 deficit into a 31-14 lead. Card connected with Eaves for another score, and Weston Stephens broke a pair of long touchdown runs to spark the Cavaliers.

Judson finished with 470 yards of offense. Lewis and Chandler II each rushed for more than 100 yards. Nearly half of the yardage (233 yards), however, came after the Cavaliers took the 31-14 lead.