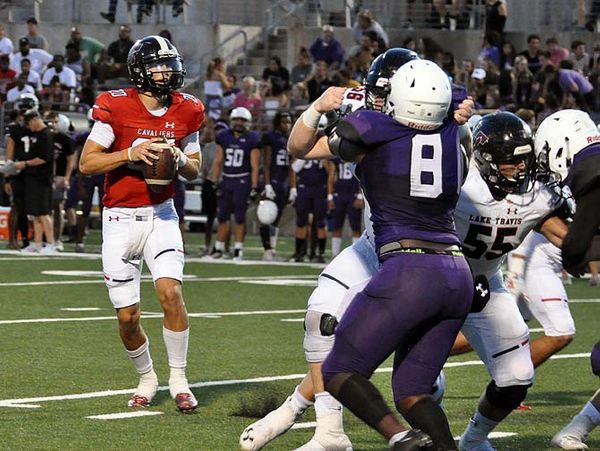 If Friday’s scrimmage against Cedar Ridge at the Kelly Reeves Athletic Complex is any indication, Lake Travis’ offense will keep humming right along.

In three series of plays, including a four-play touchdown drive in a live quarter of action, Hudson Card and Kyle Eaves looked mid-season sharp. Card found the senior receiver five times for 145 yards and two scores as part of a solid Lake Travis effort.

“For a scrimmage, it seemed like there were times that we executed things pretty well,” Lake Travis coach Hank Carter said. “Cedar Ridge is a good football team. They are physical and they do some things that give us problems.”

Card didn’t have too many problems. Unofficially, he completed 13 of 19 passes for 264 yards and four touchdowns.

“We still have a lot to work on, but I think we did pretty well for our first time out against different competition,” Card said. “We just need to do what we’re coached to do and I need to make sure I get everyone involved.”

“I think that’s the way that we’re going to be the most lethal offensively,” Carter said. “Hudson has an amazing command of our offense right now and he’s going to get the ball where it needs to go. We’ve got a lot of guys who can catch it and do things with it after the catch.”

Cedar Ridge coach Sam Robinson kept Kansas State-bound running back Deuce Vaughn’s touches to a minimum. He carried the ball just seven times but gained at least five yards on five of them.

“We know what he can do,” Robinson said. “We’re just trying to find out who can contribute for us.”

Quarterbacks Jalen Brown and Jack Turner spread the ball around as Cedar Ridge looks to replace the production of now-Baylor freshman Jaylen Ellis.

Robinson liked most of what he saw as his team wrapped up its preseason.

“At times, when we did what we were capable of, we stood up to [Lake Travis] pretty good,” Robinson said. “I wish we had played with a little bit more energy, but on the times that we did, I saw some good sparks and I think we’ve got a chance to be pretty good:”

Robinson said closing the preseason against a team of Lake Travis’ caliber – the Cavaliers enter the season ranked third in the state – lets him know exactly what his team needs to work on as the season-opener approaches.

“Playing a team like that, we knew they would expose some things for us,” he said. “But I also saw some young guys step up and find themselves some more playing time. We play a really good Temple team [to open the season], so this is going to help us out a lot.”