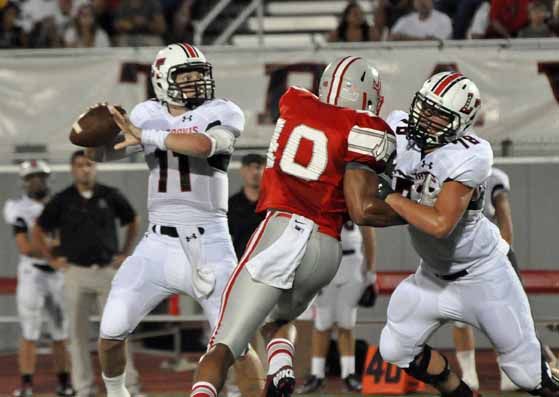 This year's meeting will be the seventh time the teams have met since 2012. The last two meetings have come in the playoffs. While Judson holds a 3-1 advantage when the teams have met in the regular season, Lake Travis has won the two biggest meetings.

A quick summary of the rivalry as the teams prepare for Saturday's clash.

Hudson Card stood tall in the face of Judson's persistent pass rush to deliver four touchdown passes: two each to Kyle Eaves and Garrett Wilson. Lake Travis' defense held Judson's high-scoring offense in check by forcing three turnovers, none more important than during a goal-line stand at the end of the second quarter.

Lake Travis avenged a regular-season defeat by rallying from a 26-14 deficit. Matthew Baldwin passed for 295 yards and three scores, Garrett Wilson and Hudson Card each ran for fourth-quarter touchdowns and added two-point conversions as the Cavaliers stunned the Rockets. Kade Langston's fourth-down sack of Julon Williams stuffed Judson's last chance to get back into the game.

Judson's defense frustrated normally high-scoring Lake Travis, and the Rockets used a first-half surge and outstanding field position to get past the Cavaliers. Shaun Nixon rushed for 70 yards on 17 carries to lead the Cavaliers.

In Lake Travis' first game in the state's highest classification, Baker Mayfield passed for 414 yards and five touchdowns, and Judson's secondary never caught up with Zach Austin, who caught 8 passes for 231 yards and four of the touchdowns.