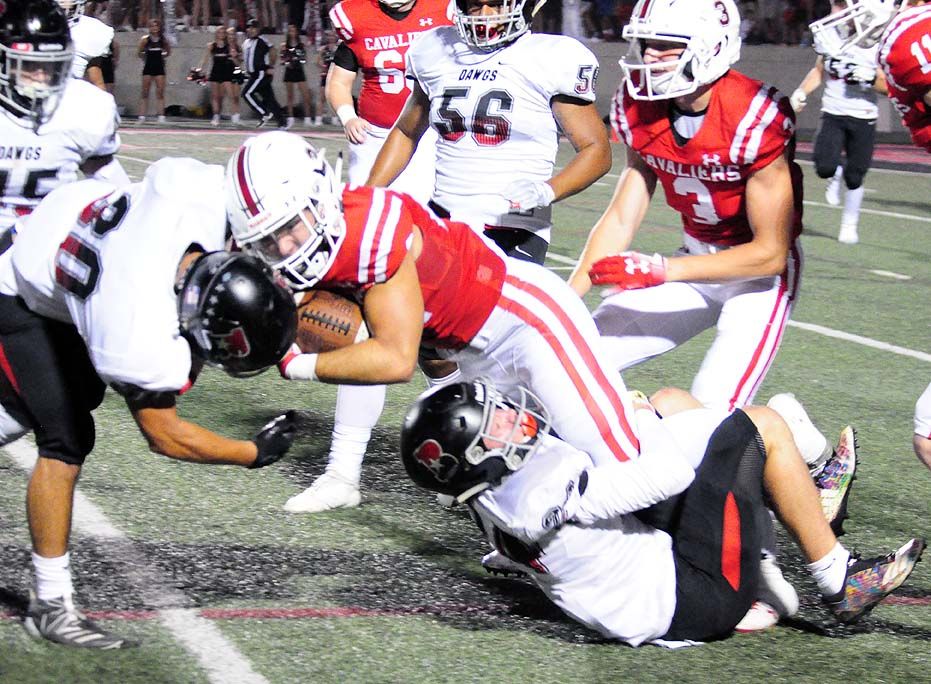 Fresh off a 52-10 domination of Bowie, Lake Travis looks for more of the same Friday against Akins at Burger Stadium.

While Cavaliers coach Hank Carter liked most of what he saw in the District 25-6A opener, following the game he said the defense needs to make its in-game adjustments a bit quicker.

“If I’m nitpicking, I think we had a couple of instances of not understanding what Bowie was trying to do to us,” Carter said. “I’d like to see our guys adjust to that a little quicker once we figure out what they’re doing.”

Lake Travis still turned in its best defensive showing of the season, allowing Bowie just 172 yards, 53 of which came on a fourth-quarter pass after Lake Travis had taken a 45-3 lead. Trey Sofia, Tag Humble and Raleigh Erwin led the way.

The Cavaliers’ offense had no such trouble against Bowie’s defense. Despite running just three offensive plays in the first quarter, Lake Travis led 24-3 at the half and used three quick touchdowns in the third quarter to pull away. The Cavaliers scored on all six of Hudson Card’s possessions – and their first seven overall.

“The coaches have done a really good job of preparing us week to week,” Eaves said, “and I think we’re starting to get the flow of our offense back.”

Eaves has caught 24 of the 50 passes Card’s completed this season and has two touchdowns in each of the last two games, picking up where the duo left off last year, when Eaves caught 69 passes.

“Hudson is spot on,” Eaves said. “We became friends when we were freshmen and the connection just sparked there. Ever since then, we’ve done everything together, hanging out, whatever, and it’s all coming together now.”

Defensive growth and continued offensive success aside, Lake Travis hopes Friday’s game serves as a season-opener of sorts. A rash of preseason injuries has kept several key players on the bench thus far, but projected starters Wesley Erwin, Judge Niland and Derrick Johnson all participated in pregame warm-ups last week, as did Watson Cusick, though none saw action once the game started. If each has a successful week of practice, Carter hopes to ease them back into action against Akins.

The Cavaliers have never lost to the Eagles and have won all five games by an average margin of 45 points. Akins won its season opener but has dropped two straight, including last week’s 58-7 decision at Westlake.

Akins quarterback Rocco Degelia has passed for 454 yards and four touchdowns so far, but he’s also thrown five interceptions. Greg Borgeson, Antonio Lopez and Kaden Adams have been the Eagles’ most productive receivers.