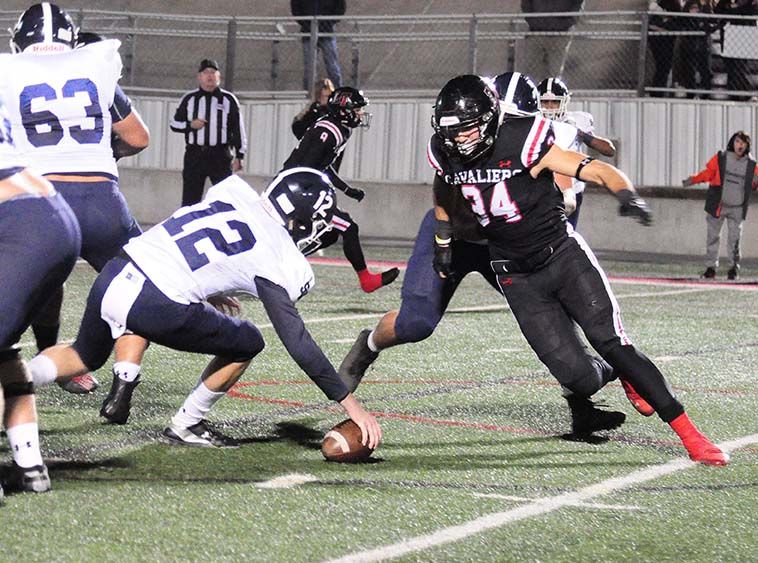 Cavaliers get defensive in bi-district win over Smithson Valley

For all the notoriety its offense gets year-in and year-out, Lake Travis leaned on its defense to stymie Smithson Valley 21-3 in Friday’s 6A, Division I, Region IV bi-district playoff.

The Cavaliers limited the Rangers to just 129 yards of offense and held them scoreless after a first-quarter field goal.

“Our kids studied film all week and really understood what Smithson Valley wanted to do,” Lake Travis coach Hank Carter said. “It’s like reviewing for a test, and when you get to the test, all of the questions were on the review.”

Johnson, a sophomore defensive back, found himself lined up opposite the Rangers’ star and made a number of plays.

“We just stuck to our game plan and executed,” Johnson said. “We just went hard on every play and executed our assignments.”

Carter said the plan focused on getting to Eggleston before he had a chance to use his speed in space. His longest carry was 11 yards, and he lost yardage on four of his 12 carries.

“We just tried to get our hands on him early and slow him down before he could get going,” Carter said.

After falling behind 3-0, the Cavaliers took a 14-3 lead. Nate Yarnell found Grayson Sandlin for a 34-yard touchdown early in the second quarter and then capped an 81-yard drive with a 1-yard run with 3:52 left. The Rangers (6-5) drove back down the field and had a chance to close the gap, but used their timeouts early and couldn’t stop the clock after Trey Sofia knocked the ball out of quarterback Luke Gombert’s hands.

“We knew we needed to get a stop,” Sofia said.

“We told our guys before that possession started how important it was got get a stop or at least force them to try a field goal,” Carter said. “They were going to get the ball to start the third quarter, so that was a chance for them to score twice. To get that stop was really important.”

Weston Stephens, who rushed for a game-high 160 yards on 27 carries, capped the scoring with a 40-yard touchdown run in the fourth quarter.