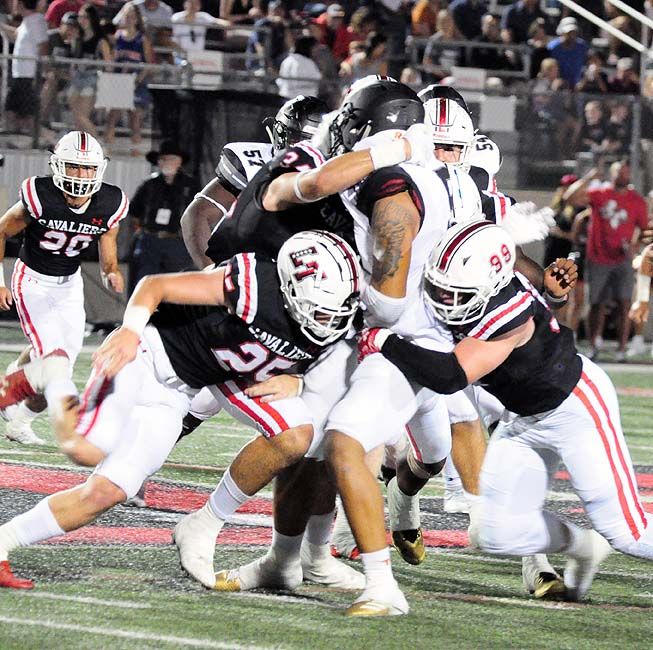 Lake Travis got a much-needed win over Mansfield Timberview last Friday to bring some positive momentum into this week’s District 25-6A opener against Bowie.

The Cavaliers’ 48-26 win over the Wolves saw improvements across the board. While pleased with the result, coach Hank Carter said his team still has work to do in advance of Friday’s game, which also marks Homecoming on the Lake Travis campus.

“You know, I love the challenge we got from facing [Timberview] because of how talented their skill players were and how big their offensive line was,” Carter said. “So yeah, we made some strides and we did some good things. We still did some bonehead things at times and those are the things we have to get cleaned up.”

Two of Timberview’s touchdowns came on long, off-tackle runs. Despite rushing for 240 yards, the Cavaliers struggled at times, getting trapped in the backfield too often for Carter’s pleasure. And the Cavaliers threw an interception that got returned for a third Timberview touchdown.

“We made the improvements that we did last week because of the way we practiced and how we prepared,” Carter said. “We’ve still got a ways to go, and we need to practice and prepare the same way this week.”

Coach Jeff Ables’ Bowie squad lost 47 lettermen and 18 starters off last year’s team, but several key pieces return. Jayden York has gotten off to a fast start this season on both sides of the ball. He spent as much time in Pflugerville’s backfield as did the Panthers’ running backs, leading Bowie to a big win. He also caught four passes for 136 yards in the win. Jason Gaines gives Bowie a second receiving threat.

Quarterback Trinidad Sanders returns for his senior season. His junior season ended when he suffered a torn ACL against Lake Travis. He’s passed for 427 yards and four TDS in two games while adding a team-high 136 rushing and two scores.

“He’s got a lot of experience,” Carter said. “We faced him a year ago. Same with the tight end [York]. They’ve got a good plan and they always do a good job coaching their kids.”

“I’m most pleased with how we ran the ball last week,” Carter said. “We still had too many negative plays, though, especially when we were trying to use the clock and score. But we did a lot of good things and we need to build on that.”

Series at a glance