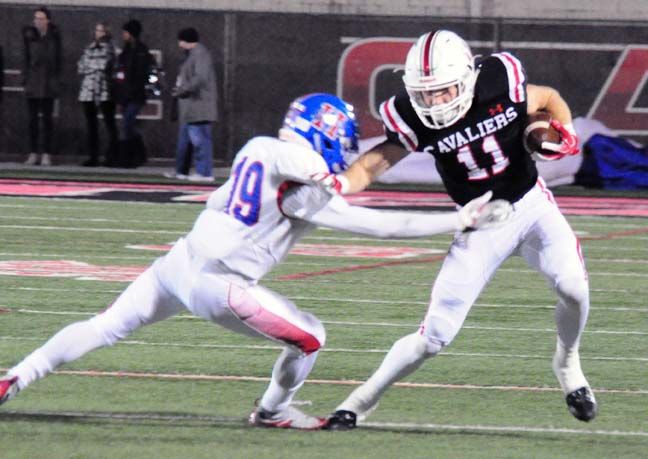 Though Lake Travis has guaranteed itself the top District 25-6A seed – and a home Bi-District playoff game -- in next week’s 6A, Division I playoffs, plenty remains at stake when the Cavaliers travel to House Park to take on Anderson.

While both Westlake and Lake Travis will be favored to win Friday – Lake Travis plays Anderson while Bowie plays Westlake – the Trojans will be motivated to pull off a shocker.

“I know the whole state thinks we’re going to finish 6-4…come on!” Anderson coach Daniel Hunter tweeted on Oct. 28, supporting his team’s quest to finish the season with wins over Westlake (last week the Chaps topped the Trojans 49-7) and Lake Travis.

The tweet may not have gotten Lake Travis coach Hank Carter’s attention, but Anderson’s play has. He knows what’s at stake for the Trojans and knows what his team will encounter when it takes the field Friday.

“I expect that we are going to get their best shot,” Carter said Monday. “We have to be ready to play a good team and hopefully we will play a good game.”

Carter’s been most impressed with Anderson quarterback Carsten Groos, a dual-threat quarterback who operates two distinctly different types of formations for the Trojans. Groos has passed for better than 200 yards per game when the Trojans spread their formation out and he’s run for more than 400 yards when they tighten up and operate out of a modified slot formation.

“It’s like preparing for two different offenses,” Carter said of his team’s defensive practices early in the week. “He’s experienced. He’s a big guy who’s a good passer, and they run him quite a bit.”

Groos is far from Anderson’s only offensive weapon. Joseph Baran and Colin Page have each rushed for more than 500 yards. Grose Kiel has been the Trojans’ most reliable receiver. Kameron Langford leads the defense.

“They play hard and have a lot of good players,” Carter said. “I expect they will do everything they can to beat us.”

While Anderson is playing for its playoff life, Lake Travis has its own goals to accomplish Friday night. A win wraps up the Cavaliers’ first outright district title since 2016.

“That is still a very important goal for our program,” Carter said. “So far we’ve accomplished most everything we want to accomplish.”

Lake Travis enters the game on an 8-game winning streak, which includes the 26-25 win over Westlake. Since Hudson Card’s injury, the Cavaliers have struck an offensive balance thanks to the re-emergence of Weston Stephens running behind a reenergized offensive line. Stephens has topped the 100-yard mark in each of the Cavaliers’ last two games – the first two 100-yard games of his career.

“He continues to play well,” Carter said. “I’m proud of how he’s responded, and I think our offensive line has played really well, especially in the running game.”

Stephens, who started for much of last season, returned to the starting lineup after classmate Marcelo Alanis suffered a season-ending knee injury against Westlake.

The Cavaliers’ resurgent running game coincides with Nate Yarnell stepping in at quarterback. After a two-touchdown, two-interception starting debut at Del Valle, Yarnell delivered a four-touchdown, turnover-free effort against Hays.

“He took a big step last week,” Carter said. “He made some great throws and he made some really good decisions.”

Such as getting the ball to the duo of Kyle Eaves and Grayson Sandlin. The Cavaliers’ two biggest weapons have combined for 98 catches, 1,718 yards and 22 touchdowns. They figure to be heavily involved as the Cavaliers look to achieve some of their still-unclaimed goals.

“They probably don’t get enough credit because they aren’t committed to a power five conference like Hudson or Lake [McRee] are,” Carter said. “But they make a ton of plays for us.”

Another Friday night of making plays will go a long way toward securing the Cavaliers the next goal on their list – that outright district championship.