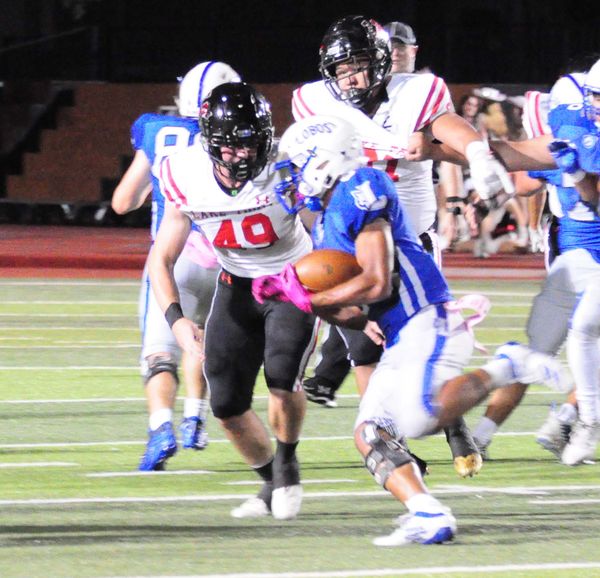 Buda – With a 59-7 win over Friday night, Lake Travis can finally turn its attention to next week’s District 25-6A showdown with Westlake.

Lake Travis’ starting offense scored on all five of its first half possessions before heading to the sidelines for the night. Hudson Card completed all eight of his passes for 164 yards and two scores while rushing for a third score, and Marcelo Alanis ran for two touchdowns. In all, Lake Travis (4-1, 3-0) scored on all 9 of its possessions.

Lehman’s Keyshaun Williams’ touchdown early in the second quarter allowed the Lobos Lehman (1-4, 0-3) to avoid being shutout. A long pass from Logan Travis to Keon Bailey and Travis’ 17-yard scramble set up the score.

“You have to give Lehman a lot of credit,” Lake Travis coach Hank Carter said. “Coach [Bruce] Salmon is playing a ton of young players and they made some plays and executed and played sharper than we did in a lot of ways.”

But the offensive efficiency was overshadowed ” evening for the Lake Travis defense. A penalty-filled night – Lake Travis committed 10 penalties for 104 yards – included a handful of personal fouls against the defense in the first half.

“Too many penalties that just come down to poor execution by us,” Carter said. “We have to coach better and play better. When you commit a penalty on defense, that’s basically giving the offense a first down and you just can’t do that. We’re playing hard, but you have to play smart, too.”

“I feel like we came out and weren’t quite as focused as we should have been,” said safety Ife Ohalete. “But I think we picked it up in the second quarter.”

Despite the penalties, Lake Travis’ defense made its share of plays. Jaden Nguyen recovered a fumble after the Cavaliers sacked Travis in the second quarter, and Maui Trevino blocked a punt that Ohalete returned 52 yards for a touchdown.

“It felt really good to make a play,” Ohalete said. “It was a team win and it was good to help out my team.”

Carter was pleased that a trio of defensive starters returned from injury, including sophomore defensive back Derrick Johnson, a projected starter who missed the first five games with a hamstring injury. Linebacker Tag Humble and defensive end Trey Wright also returned to the lineup.

“It was great to see him out there moving around,” Carter said. “He shook some rust off, but he looked good and he looked fast. We’ll need him going forward.”

Lake Travis hosts Westlake next Friday. Westlake has won the last two meetings between the teams. Prior to that, Lake Travis had beaten the Chaps 10 consecutive times.