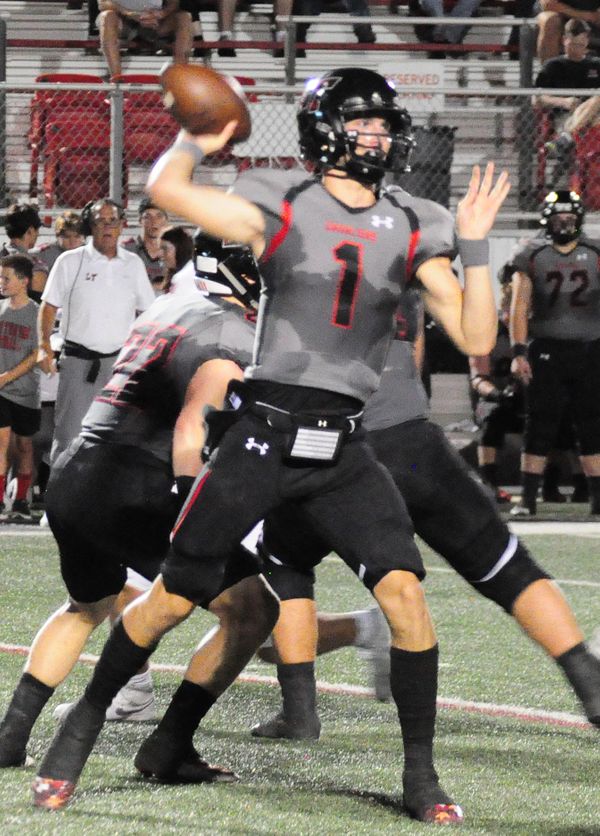 No one will blame Lake Travis Cavalier Stadium public address announcer Dave Cody if he chose to open his pregame announcements by channeling his inner boxing ring announcer and announce over the booming speaker: “It’s time for the main event of the season!”

With all due respect to the other seven District 25-6A members, Friday will indeed mark the main event of the regular season when Westlake makes the short drive west to visit Lake Travis for the 14th annual (and 15th overall) installment of the Battle of the Lakes.

While the game doesn’t have playoff implications – Lake Travis will be a 6A Division I qualifier while Westlake appears destined for 6A Division II – it does have title implications. The game has decided the district championship every year but one since the two rivals because district mates in 2012. And then there are the bragging rights.

“Obviously, we're playing another really good program and it’s somebody who is close by,” Lake Travis coach Hank Carter said. “It’s a rivalry game with District Championship implications and MVPs of districts and all those bragging rights are on the line. But neither of our seasons are going to be over after this. One or both of the teams goes on to have a great season.”

Lake Travis, despite leading the overall series 10-4, wants to put an end to Westlake’s current two-game streak in the series.

“This is a big test for us and they are our rival,” said Lake Travis quarterback Hudson Card. “Having lost the last two years, that kind of puts a chip on your shoulder, especially because it’s our senior year. You definitely want to get that W on the last one.”

“This is our test,” said Lake Travis defensive back Copeland Gothard, “and seeing that we lost two years in a row, we want to get that back and show that we can compete with this team and we can win.”

After a nine-year drought that saw Lake Travis hand the Chaps two of their most lopsided losses ever (49-7 and 51-3, both in 2016), Westlake has won the last two games by leaning on a suffocating defense and getting timely big plays on offense. While many of the players who led Westlake’s defensive effort in those two wins – 21-14 in 2017 and 44-14 last year – have graduated, a few key players return with the confidence that comes with beating a rival.

“It was important for us this season to get off to a really good start with our returning veterans, and we did that,” Westlake coach Todd Dodge said.

The Chaps handled Belton 48-0 and Cypress-Fairbanks 35-7 while leaning on the leadership of defensive linemen Bobby Duncum and Austin McClendon and defensive backs Sage Luther and Leo Lowin. Once District 25-6A play began, the newer starters had gotten up to speed, and the Chaps have yet to allow an opponent to score more than eight points in a game while remaining a constant near the top of the 6A rankings. The Chaps (5-0, 3-0) enter Friday’s game ranked sixth.

“They have a big defensive line, and their kids are playing hard like they usually do,” Carter said. “They seem to be a really, really good football team.”

Lake Travis has regrouped following a surprising season-opening loss to Arlington Martin. Five consecutive wins, including four to open district play, have the Cavaliers climbing back toward the top 10. After nearly falling out of the rankings, the Cavaliers are ranked 15th.

Both coaches know that while they’ve taken care of business to open district play, they haven’t faced a team quite like the one they’ll line up against Friday.

“The price of poker definitely goes up [this] Friday,” Dodge said. “This is going to be a big-time test for us, and I know that’s stating the obvious. They are really starting to look like you expect a Lake Travis team to look.”

Westlake’s defense will again be focused on containing Card and Lake Travis’ passing game, which features receviers Kyle Eaves and Grayson Sandlin. In their two recent wins, Westlake’s been able to pressure the passer with its front four while containing the run. That’s allowed the linebackers and defensive backs to keep receivers from running into open spaces.

“We’ve got to contain the quarterback,” Dodge said. “He can beat you so many different ways, from the pocket, outside the pocket. He can beat you with his legs. And Eaves and Sandlin have done a really good job as well.”

On the other side, Lake Travis will say the same thing. The Chaps have used a unique passing game to attack opponents. Receivers Mason Mangum and Ryan Lindley have been one of the most dynamic receiving duos in the area – Lindley has 11 touchdown grabs already and the duo has combined for 55 catches. They have been reliable targets for each of the three quarterbacks Dodge has used. Seniors Kirkland Michaux (744 yards, 13 TDs) and Drew Willoughby (347 yards, 4 TDs) have split time with sophomore Cade Klubnik (393 yards passing, 170 yards rushing).

“This is a first for me,” Dodge said. “I kind of stepped outside the box a little bit. I’ve never rotated two quarterbacks before, much less three, but everyone in that quarterback room is playing at a really high level, so we’ve just continued to do that.”

Gothard said the three-quarterback system has forced the Cavaliers to pay closer attention to each player’s habits to see how they handle things before the snap, but once the ball is snapped, it’s still about executing the call and playing the correct coverage.

“We just have to focus on the small details,” he said. “It’s definitely going to be a challenge [to slow their passing game] but we think we’ve got a good game plan.”

Both teams like their plan and both teams like the way they are playing as the game arrives. How each handles the added element of the rivalry – and how the respective communities play the game up – will be the x-factor in who comes out on top.

“Our kids have gotten much better at playing in these games,” Dodge said. “We just quit listening to all of that outside noise and everything else that comes in the lead-up. We go into the game really expecting to do well and that’s been a big key.”

“We’re just going to treat it like a normal game,” said Lake Travis offensive lineman Dawson Weiss. “I know that it’s going to be different with all of the outside stuff and the distractions, but we are going to focus on our plan and not the outside distractions.”

“We just have to stay within ourselves,” Card said. “Obviously the intensity is going to be up a little bit just because we’re playing our rivalry game, but we just need to stay focused and trust the plan the coaches have put in. Doing that will bring good things.”

Inside the 2019 Battle of the Lakes