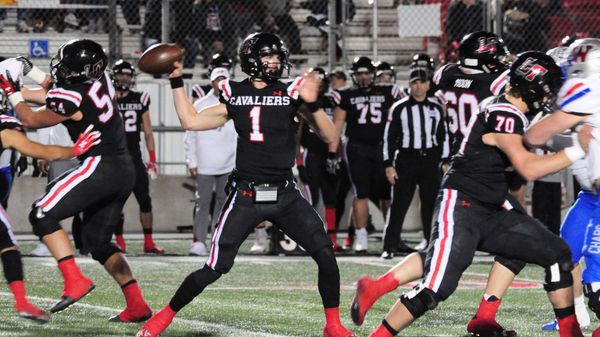 After fearing a foot injury would sideline him for the remainder of the season, Lake Travis quarterback Hudson Card announced Wednesday night that two subsequent opinions determined he will not need surgery, opening the door for a return to action in four-to-six weeks.

“I decided to get a second and third opinion on my injury and it appears that I will not be needing surgery,” Card tweeted. “God is good!”

Card said the two doctors used a live X-ray – medically known as fluoroscopy – to evaluate exactly what was happening in his right foot. While it was originally feared that a ligament had completely detached from the bone, the live x-ray revealed that it was still partially attached.

“Both doctors saw that and agreed that I could heal without surgery,” Card said Thursday.

Doctors said that, depending on how the foot healed and responded during rehabilitation, Card might be able to return to action between four and six weeks. But Card is quick to point out that his recovery is very much a moving target depending on progress. He must wear an immobilizing boot for three weeks. Then he goes back to the doctor for a checkup that will determine the rest of timeline.

“This is very much a play-it-by-ear situation,” he said. “It depends on how that checkup goes. We haven’t discussed much about how rehab would go. I’m just glad that I don’t need surgery. When I’m ready, I’ll start on rehab and see how it feels. I’m happy that the possibility is there that I could play again [this season].”

Card said neither doctor expressed concern that he would be prone to re-injury if he opted for the non-surgical path.

If a four-week return is the best-case scenario, Card could return for Lake Travis’ Area playoff game (provided, of course, the Cavaliers win their bi-district game against a District 26-6A opponent) the week of Nov. 22. A six-week recovery period pushes his potential return toward a regional semifinal or final in late November or early December.

The senior Texas commit who plans to graduate from Lake Travis in December and enroll at Texas in January said he suffered the injury on the third series of the game against Westlake, in the first quarter. He never came out of the game and even served as the Cavaliers’ punter despite the injury to his kicking foot.

“I had no idea what had happened at the time,” Card said. “I just knew something was off. It would really hurt for a few seconds at a time, so I just had to endure it. I wanted to fight through it and stay in the game.”

The injury came during one of Card’s best performance, a three-touchdown, no interception performance to give Lake Travis its first win over rival Westlake since 2016.

The original diagnosis showed that Card suffered a significant turf-toe-like injury that included ligament damage that requires surgery to repair.

“It’s okay,” Card said when he thought his season was over. “It’s definitely not the news that I wanted to hear, but I’m just going to focus on getting better now. At least I ended on a memorable game.”

“He is one of the toughest guys we’ve had play here,” Carter said, noting that Card played part of the 2017 season with a broken left wrist and never missed a game.

Against Westlake, Card completed nine of 10 passes in the fourth quarter, including touchdowns to Kyle Eaves and Grayson Sandlin as Lake Travis erased 17-12 and 25-19 deficits. The win snapped a two-year losing streak to Westlake. He completed 20 of 31 passes for 224 yards and three touchdowns to lead the Cavaliers.

While Card got encouraging news, junior running back Marcelo Alanis, also injured against Westlake, did not. Lake Travis coach Hank Carter confirmed Wednesday that Alanis will miss the rest of the season after suffering an ACL tear in the third quarter. He is Lake Travis’ leading rusher.