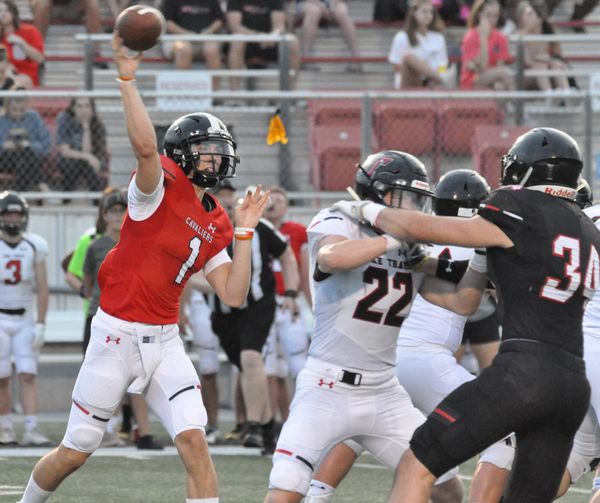 Originally published May 20 at Statesman.com.

Lake Travis served notice that there will be life in the Cavaliers’ passing game in the post-Garrett Wilson era.

“We saw a lot of the things we’ve seen all spring,” Lake Travis coach Hank Carter said. “I thought Hudson threw the ball really well. You can tell that he looks different. He’s had a full offseason and he’s gotten bigger, stronger and more confident.”

Sandlin, one of a number of players who saw his 2018 season derailed by injury, made the scrimmage’s top play, a 38-yard touchdown grab in the only series between the starting offense and starting defense. Tight end Lake McRee, who emerged late last season, added a pair of catches. Running back Wesley Erwin also caught a pair of passes to go along with a 15-yard touchdown run.

“I thought Gray made a great catch for the touchdown,” Carter said. “Erwin ran the ball really well, just like he’s done all spring. Lake [McRee] is becoming a weapon with his blocking and obviously with the way he can post up and catch the ball.”

“Our offensive line made some strides,” Carter said. “I think that unit is going to play better than it has in a while, provided everyone can stay healthy. That group has had a really nice spring.”

Working against the second-string offense, the Cavaliers’ starting defense registered a trio of quarterback sacks, including one each by Sofia and Wright, an athletic junior who is still developing as a pass rusher.

“He’s had a great spring,” Carter said. “He’s still developing. He’s got some unique ability and he’s still learning how to play the position. He used to be a safety and a wide receiver for us, but there is plenty for us to be excited about.”

Carter wants his Cavaliers to carry the momentum from a productive spring into the summer. There’s still weight work to do so the team is in top shape when it convenes in August for preseason practices.

“I think we’re in a great spot,” Carter said. “We’ve got to get bigger and stronger still. That’s always been the deal for us when we’ve fallen short. We couldn’t stop the run and we couldn’t hold up with our offensive front. The work we do this summer is going to be very important.”

The night’s only blemish came when Nathan Ellisor was helped off the field with an apparent knee injury. One of the Cavaliers’ kickers, Ellisor had asked coaches for a chance to play a position in addition to kicking this season. He’d played defense as a freshman two years ago and was playing as a second-team defensive back when he suffered the injury early while tackling Eaves along the sideline.

“He made a great tackle on that play,” Carter said.