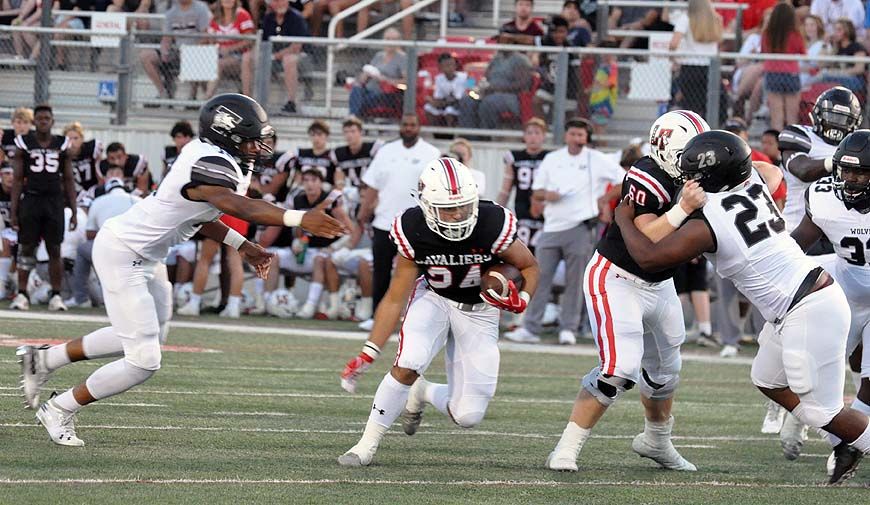 Renowned for its vaunted air attack, Lake Travis took the low road to pull away from Mansfield Timberview Friday night.

Led by Marcelo Alanis, the Cavaliers rushed for 249 yards, far from a groundbreaking total but still a welcome result after a season-opening loss to Arlington Martin.

“We made running the ball a priority during practice last week, but we always want to be able to run the ball,” Lake Travis coach Hank Carter said. “We definitely played better but the brightest spot was the physical, downhill running game.”

The Cavaliers entered the season with a stable of running backs – four of them juniors and all of them with different skill sets. Of the group, Alanis runs most effectively between the tackles, and Lake Travis’ offensive line opened holes for time time and again. Rather than rotate running backs, coaches decided to stick with what was working. When the dust settled, Alanis had carried the ball 25 times for 164 yards, both career-highs, and the Cavaliers won 48-26.

“It was such a fun night,” Alanis said after the game. “I can’t thank the offensive line enough. We practiced hard all week but we really put forward the effort to execute perfectly.”

Not quite perfectly, Carter said, but perfect enough. Alanis’ 25 carries marked the most a Lake Travis running back has gotten the ball in a game since 2014, when Abe Willows carried the ball 28 times for 158 yards against Waco Midway. Shaun Nixon carried the ball at least 25 times in four different games in 2013.

“It’s kind of like fishing,” Carter said. “When the fish are biting on a particular bait, you don’t change the bait. Marcelo is a very distinctive inside-the-tackles runner. He has a nice feel for it and he has excellent vision, and the line was fitting up blocks and moving guys for him. The line made some big strides in the last week.”

Two plays exemplified the work that Dawson Weiss, Andrew Salem, Jacob Tracy, Todd Moon, Seth McDaniel and Cain Smith did throughout the night. Late in the second quarter, Timberview scored to cut Lake Travis’ lead to 20-12, and a penalty on the kickoff return pushed the Cavaliers back to their own 12. On the second play, Alanis broke free through the line and sprinted 49 yards, keying a drive that culminated in a Grayson Sandlin touchdown catch and a 27-12 lead at the half.

“That was a major turn in the game,” Alanis said. “I just saw a hole and when you see that, it’s time to go.”

Late in the game, with the Cavaliers still leading by 15 points, Alanis broke loose again and sprinted 43 yards for a touchdown.

“It felt amazing, but it’s all due to the offensive line,” Alanis said. “It’s awesome when everyone comes together for a total team effort.”

While Alanis had the hot hand against Timberview, both he and Carter know it could be another running back who leads the charge against Bowie, Westlake or another opponent somewhere down the line. Weston Stephens gives the Cavaliers a speedy receiving threat. Wesley Erwin showed breakaway speed on the edges through the spring and into preseason practice before an ankle injury sidelined him. And Gary Gordon and Watson Cusick (also injured) will figure in the mix as well.

“We’ve got several different personnel packages, and it’s all about maximizing the different skill sets each guy has,” Carter said. “The things we were doing well the other night were the things that Marcelo excels at.”