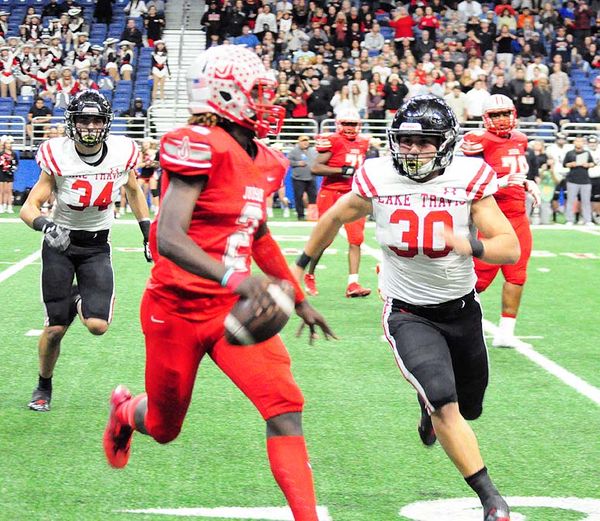 Offense does indeed sell tickets – nearly 20,000 turned out to watch Lake Travis and Judson battle for a spot in the 6A, Division I semifinals – but defense wins championships, at least of the regional variety. Lake Travis got a game-changing goal-line stand to end the first half, forced three turnovers and held the Rockets 40 points below their playoff scoring average in a 38-21 win.

“The defense played outstanding,” said quarterback Hudson Card, who played a fair game himself, shredding Judson’s defense for 316 yards and four touchdowns through the air. “I don’t know what they held [Judson] to, but they did great. They gave us the opportunities to go down and score.”

Judson rushed for 224 yards but never managed a momentum-changing gain. Once Lake Travis opened up a 24-14 third-quarter lead, the Rockets opted to try and throw their way back into the game without the desired results, completing just three passes that gained more than seven yards.

“They fought hard,” Carter said of his team’s defensive effort. “The tempo that Judson plays with and how strong their skill guys are and how good they are in space, I’m proud that we held them down.”

Tag Humble led the Cavaliers with 14 tackles. Maui Trevino made 12 tackles and recovered a fumble. Nick Villareal battled a pair of injuries and contributed 10 tackles. Copeland Gothard had eight tackles and intercepted a pass for the second straight week.

Knowing Judson wanted to run the ball with the combination of Sincere McCormick and Mike Chandler, the Cavaliers crowded the line of scrimmage, shutting off McCormick’s rushing lanes and daring Chandler to throw the ball. While McCormick rushed for 109 yards and a touchdown, he gained just 47 yards after halftime.

“We wanted to stop their back, Sincere,” said defensive tackle Kaleb Wenson, who teamed with Raleigh Erwin to lead the Cavaliers’ defense at the point of attack. “He was their explosive player. The quarterback was good, but he’s not Julon [Williams].”

Unlike the explosive Williams, who amassed nearly 800 yards of offense in two games against Lake Travis in 2017, Chandler proved elusive at times but often came up short when he scrambled – on five of his 18 rushes, he came up a yard short of a first down, including a fourth-down run late in the game.

“Our coaches had a good scheme,” said Gothard. “It wasn’t hard. We wanted to load the box and make them throw the ball.”

Though Chandler hit Antony Shelton for a pair of touchdowns, he completed just 10 of 25 passes for 140 yards.

“We stopped the run game because we knew they were a running team,” Gothard said. “We knew that their quarterback had to scramble so we had to put pressure on him and make him throw the ball.”

After trading touchdowns in the first half, the Rockets appeared poised to take a lead into the locker room, electing to go for it at the Lake Travis 1-yard line on the final play of the half. The Cavaliers not only stuffed the play, they forced a fumble that Charlie Cross recovered and left the field on a high.

Confident coming out of the locker room, the Cavaliers took a lead they’d never relinquish when Card caught the Rockets in a blitz early in the third quarter. Judson tipped its hand early, and Card connected with Garrett Wilson in the space vacated by a blitzing safety for a 60-yard touchdown and a 21-14 lead.

“We took a lot of confidence from that,” said defensive end Matthew Peterman. “It was a long, tiring game but it gave us a lot of energy watching our offense score like it did in the second half.”