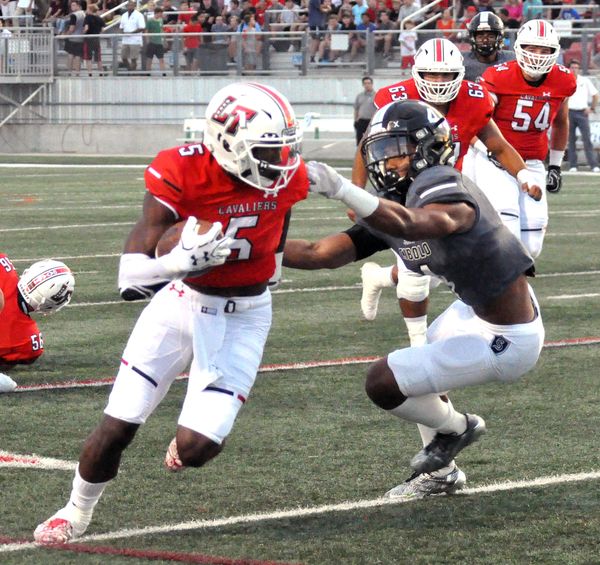 Originally published by the Austin American-Statesman.

Each of Lake Travis’ Division I quarterbacks had one thing in common: a standout receiver – or two – to keep the Cavaliers’ high-octane passing attack humming.

Last season Hudson Card served as one of those standout receivers – catching 67 passes for 1,134 yards and 13 touchdowns. Along with his rushing and passing prowess, Card earned first-team all-state honors as an all-purpose player from Dave Campbell’s Texas Football, and he’d rank as one of the leading returning receivers in 6A this season.

Except he’s not playing receiver this season. Card, who verbally committed to the University of Texas earlier this summer, will take his turn behind center as the Cavaliers’ next Division I quarterback. Despite Card’s move from receiver, Lake Travis will still have plenty of pass-catching options – including one of the nation’s top receivers in Ohio State-bound senior Garrett Wilson (103 catches, 1,757 yards, 32 total TDs).

“We imagine that Garrett will continue to wow us,” Lake Travis head coach Hank Carter said. “We appreciate his attitude, his mindset. He goes out there and works his tail off.”

He’s spent the summer improving his 5-star skills in order to combat the double-teams he knows are coming from defenses. At camps including the prestigious Opening, Wilson’s worked against top-flight receivers and defensive backs to become tougher to cover.

“I have worked on my route-running and versatility,” Wilson said. “I’m working the mid-range game, getting across the field so they can’t double-cover me. I think that’s the most improved part of my game.”

That’s bad news for opposing defensive backs. So is the emergence of Lake Travis’ next group of receivers.

“Obviously Garrett is the freak, but we’ve got some studs along with him,” Card said.

The new quarterback’s been working out regularly over the summer with Wilson, seniors Cortland DeNisio and Jojo Patterson and juniors Greyson Sandlin and Kyle Eaves among others. Backup quarterback Peyton Janecek, who reminds Carter of former receiver/kick returner Carson Pepe, will also see time at receiver.

“Throwing every day helps develop that connection,” Card said. “That’s going to be really important that we’re on the same page and confident in one another. I know all those guys are going to step up. They are great players and I’m looking forward to it.”

Each receiver gives the Cavaliers a different option to complement Wilson’s complete game. Sandlin and Eaves, who started last season at receiver before sliding over to play defensive back, remind Carter of a pair of recent graduates who earned FBS scholarships.

“I think that Kyle Eaves and Grayson Sandlin have got a chance to be stars,” Carter said. “They look like they can each be another Cade – Brewer and Green. I’m excited about them.”

At 6-foot-4, Carter said Sandlin gives Card a big target in the same way that Cade Brewer gave Charlie Brewer and Griffin Gilbert gave both Michael Brewer and Baker Mayfield. With his speed in the slot, Eaves reminds the coach of Cade Green, who totaled more than 1,000 receiving yards in each of his last two seasons.

“Cortland DeNisio is a technician and a really good route runner,” Wilson said. “JoJo [Patterson] is really good as well. They just haven’t done it before. Receiver is one of those positions where you can bring dudes in and they’ll do well. I’m really confident about this group.”

The earlier Sandlin, Eaves, Patterson, DeNisio and others start making plays, the sooner defenses must decide if they’ll continue to roll coverages to Wilson.

“It definitely makes it a challenge,” Carter said of the choices defenses must face against an offense with many weapons. “That’s tough because you have to guard the whole field. I use the term all the time as a defensive coach. You’re trying to patch holes in the ship and you’re running out of fingers. Hopefully it will work out that way. We have a ton of capable guys and a ton of wide receivers.”