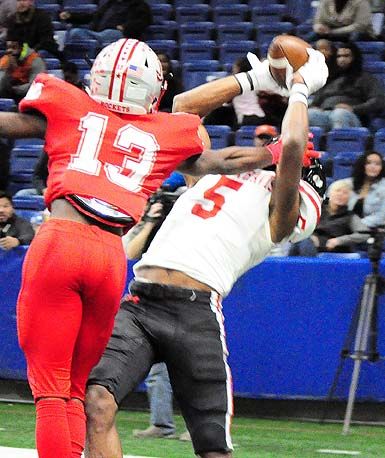 When Lake Travis takes the NRG Stadium field Saturday afternoon, it will stand toe-to-toe with a North Shore team that will attack no matter which team has the ball.

Featuring an explosive offense than can make big plays with both the run or the pass, North Shore scores 54 points per game. While the offense has scored at least 35 points in every game, the Mustangs’ defense hasn’t allowed more than 21 just once.

Led by a handful of college prospects including defensive tackle Tony Bradford and linebackers Daymond Lewis and Corey Flagg, the Mustangs allow less than 200 yards and 11 points per game. North Shore’s put the clamps on opposing offenses with a pressure defense that has recorded 101 tackles for loss and 36 sacks, including nine from Bradford.

“They like to bring the house,” said Lake Travis offensive lineman Andrew Salem. “They blitz a lot. But, I think we can handle that. Last week helps our confidence a great deal.”

Lake Travis coach Hank Carter said the Mustangs have put a great deal of confidence in defensive backs Upton Stout, Jojo Wilson, Dorian Hewett and Keeyon Stewart. The quartet often finds itself in man-to-man coverage with opposing receivers. More often than not, they win those matchups. The group’s responsible for six interceptions and four touchdowns.

“They like to play man coverage with a lot of pressure on the passer,” Carter said. “They will come after you. They put a lot of guys in the box and they don’t give you a lot of time to win those matchups on the outside. The thing about man-to-man coverage….if you can get open, you’re not usually open for very long. We have to make the plays when we get the chance.”

North Shore has allowed only 1,390 passing yards and has limited opposing quarterbacks to a 41 percent completion rate. Carter’s seen the statistics. He also understands that the Mustangs haven’t seen a team that throws the ball as well as Lake Travis does.

The Cavaliers average 270 yards passing, and Hudson Card’s had two of his most effective games in the last two weeks, tossing 11 touchdown passes with no interceptions in wins over Weslaco and Judson. On the season, Card’s completing 70.9 percent of his passes for 3,370 yards and 49 touchdowns.

Card’s favorite target has been senior Garrett Wilson, who’s battling through injuries to live up to his ranking as the top player in the state. Wilson missed four regular season games but returned for the playoffs. In Lake Travis’ wins, Wilson’s averaging eight catches, 139 yards and two touchdowns per game. He knows North Shore’s defense will give the Cavaliers their toughest test since Westlake.

“North Shore is really athletic on defense, especially in the back half of the defense,” Wilson said. ”Their secondary is going to be a little bit more of a challenge than it was last week.”

“I guess they wanted to see how it goes with what they’ve done all year,” Wilson said. “It didn’t go how they wanted it to. It’s just hard to make a change in a week when you’ve been playing that way for 12 weeks. I mean, they were 12-0, being successful and making a lot of plays on defense, so why change it?”

Wilson beat man coverage, primarily from Kenyon Morgan, for three touchdowns including a 60-yarder early in the third quarter when the Rockets tipped their blitz early and Card made them pay.

“Yep, we saw it,” Wilson said. “Card gave me a check that changed my route to a post. He saw the blitz and saw that they were playing head up on me. I just beat him and Card put a good ball on me, let me run under it and that was that.”

As he’s gotten more familiar with his offense and his ability to read defenses, Card’s been more assertive with changing plays to take advantage of mismatches.

“If we see them in press coverage, Card likes to change me to a different route,” Wilson said. “I like to do it too, obviously, so it’s usually a touchdown play when we see it. He does a great job making the calls.”

As he did against Judson, Wilson will look to make the most of any opportunity he gets should he find himself against one-on-one coverage. While Lake Travis opponents haven’t found success covering the Cavaliers one-on-one, Wilson doesn’t expect the Mustangs to change from what’s worked for them all season.

“When you win and are as successful as they’ve been was all year running their stuff, it’s hard to change it up and get the kids to play that way and play successfully in a new scheme,” Wilson said. “They are going to man up and play you straight up so it’s going to be like back-yard football. It’s going to be a fun game.”