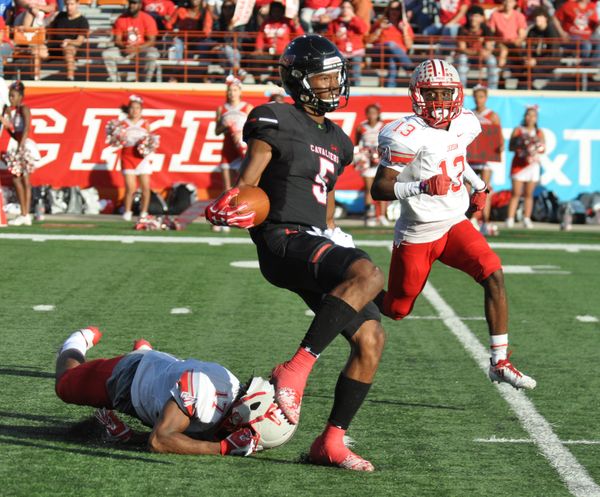 Originally published in the Austin American-Statesman

Lake Travis’ players and coaches never get caught looking ahead, especially in the playoffs. But in the immediate aftermath of the Cavaliers’ 56-14 win over Weslaco, it became very clear the Cavaliers had more than the Panthers on their minds.

“It’s always great to win these games, but we’ve got to get ready for next week,” quarterback Hudson Card said after setting career-highs for passing yards and touchdowns despite sitting out the second half. “We’ve always had them in the back of our mind.”

Next week has arrived, and with it comes a showdown with familiar foe Converse Judson. The Cavaliers and Rockets meet for the fourth time since the start of the 2016 season Saturday, back in the Alamodome. At 12-0, the third-ranked Rockets will give the Cavaliers their toughest test since Lake Travis’ Oct. 12 loss to Westlake.

“This is the one you’ve been waiting for,” Cavaliers’ coach Hank Carter told his team on the field.

Since Lake Travis jumped into the state’s largest classification in 2012, the Rockets have been their most troublesome opponent. In five meetings, Judson holds a slight 3-2 advantage. After beating Lake Travis 65-45 to open the 2017 season, Judson had won three straight games in the series, but the Cavaliers have the most recent tale of success, a 47-39 win in last year’s Area playoff game played at the University of Texas.

“They are a great team and it should be a great game,” Card said. “I’m really excited.”

“Like I said, they are a great team,” Card said. “They’ve got a lot of great players coming back from that team, but so do we. It should be a good match-up.”

Both Card and Garrett Wilson played key roles in the Cavaliers’ 47-39 win. Each caught early touchdown passes from Matthew Baldwin as Lake Travis built a 14-3 lead, but Judson stormed back to lead 26-14. The Cavaliers began their comeback with a run that included a 73-yard touchdown catch by Wilson, and Card’s one-yard touchdown and subsequent two-point conversion gave Lake Travis a lead it wouldn’t give up.

Sincere McCormick is one of the Rockets who played a key role in the game. His fourth-quarter touchdown kept Judson alive, but the rally fell short when Kade Langston pulled Rockets’ quarterback Julon Williams down by a thread hanging off his jersey on a final fourth-down try.

McCormick rushed for more than 100 yards in both games against the Cavaliers last year and returns to lead the Rockets again, having gained 1,396 yards with 21 touchdowns in 12 games. McCormick’s success has helped new quarterback Mike Chandler II amass 3,000 combined passing and rushing yards with 36 touchdowns.

Like Lake Travis, the Rockets enter the game on a roll. Perfect on the season, Judson’s picked things up in the playoffs, averaging 60 points per game while allowing just 17. Since defeating Wagner 35-28 in the season’s second week, the Rockets have beaten every opponent by at least 26 points.

The Cavaliers have seen what the Rockets can do – last year’s season-opener saw Judson set opposition records with 65 points and 753 yards – but they’ve also put that game behind them and found success since.

“Judson’s obviously a very good team and they will present lots of challenges,” said receiver Kyle Eaves, who played in both games against the Rockets a year ago. “We just need to have a good week of practice and I think we’ll be good to go.”

“It’s definitely a good feeling for us, but they’re probably looking at it like they want to beat us even more, so we need to be prepared for that,” he said.