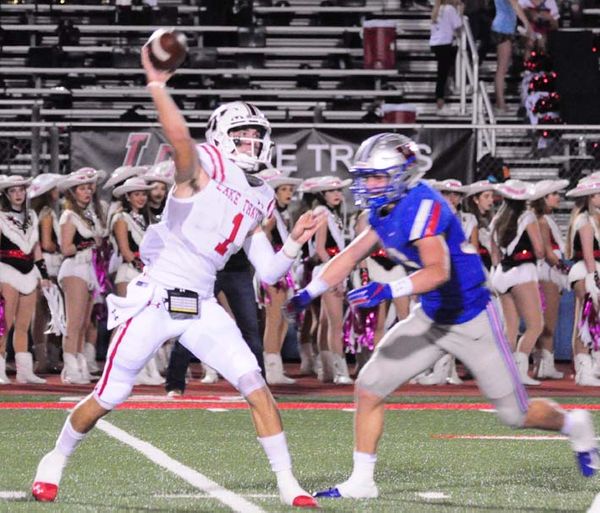 For the second straight year, Westlake’s experienced defense took advantage of Lake Travis’ first-year starting quarterback to win the Battle of the Lakes.

“Hudson Card is a great athlete and in two years he’s going to be the future of this town, but he’s never felt the type of pressure that we put on him tonight,” said Westlake defensive lineman David Neil, who helped lead the Chaps to their most lopsided win in the series’ 14-game history, 44-14.

Lake Travis’ junior quarterback, making just his eighth career start, stepped onto the Ebbie Neptune Field turf having thrown 20 touchdown passes without an interception while leading the Cavaliers to a 5-0 start. Westlake never let him find his rhythm. Card lost a first-half fumble and then threw third-quarter interceptions in the face of Westlake’s pressure, one of which Drew Webster returned 64 yards for a touchdown to build on what was a 20-7 Westlake lead.

“We have a strong defensive line, and we knew after we were up 20-7 that they were going to start taking their shots,” said Westlake defensive back Leo Lowin, who also intercepted the Lake Travis quarterback. “We knew we had to bring pressure to give them less time and that led to some bad balls where we got some picks and turnovers.”

“What we saw in our preparation was our DLine against their OLine was going to be a good matchup for us,” Neil, who had one of Westlake’s three sacks, said. “But we saw an opportunity that [Card] was a little bit young – he’s only a junior against a senior-stacked defense -- and we took it from the start. That was our game plan from the beginning.”

“They had a great plan,” said Lake Travis coach Hank Carter. “I don’t think it was anything we weren’t prepared for. We got whipped up front and we didn’t handle the moment like we needed to.”

Webster, one of those seniors, recovered a fumble in addition to his interception. Linebacker Blake Chambers, another senior, sacked Card late in the game.

Westlake’s defense – which had two other interceptions negated by penalties – held Lake Travis to just 247 yards of offense, nearly 200 yards below their season average. Card completed just 16 of 31 passes for 140 yards, and while he gained 75 yards on 13 carries, he lost yardage on each of his last five rushes.

“Yeah, tonight wasn’t the best for him but he’s going to learn from this and get better,” Neil said, offering a little counsel for the quarterback who’s committed to his father Dan’s alma mater. “He’s going to understand how to do this and how to work with the pressure that we brought because other teams are going to try and copy that. He’s going to learn.”

If it proved to be the worst of times for Card, Neil and his teammates planned on enjoying their second straight win in the rivalry.

“Yeah, as a senior it’s amazing,” he said. “We grew up watching our team not know what to do against this team for nine years. Once you get on the team, you dream of doing something about it, and now we’ve executed that. It’s the most satisfying thing in the world.”