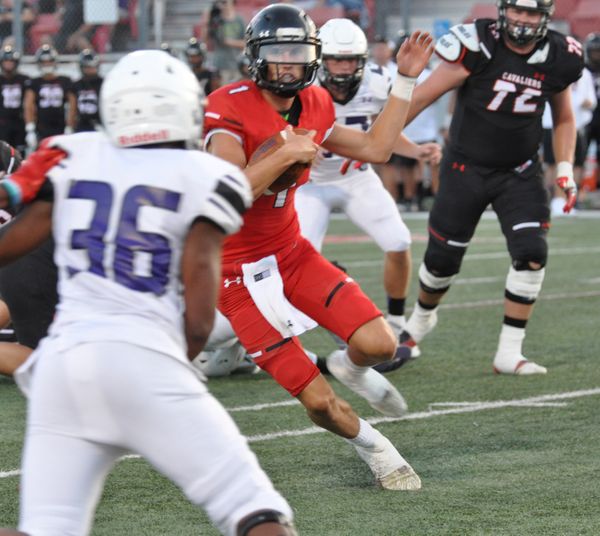 Lake Travis opens the 2018 season Friday with the first of back-to-back trips to Arlington, taking on Martin High School at the University of Texas-Arlington’s Maverick Stadium.

The Cavaliers enter the season with high hopes. A number of key pieces return from last year’s 6A, Division I state runner up team, and Lake Travis has its sights set on a fourth consecutive trip to the title game.

Ohio State-bound receiver Garrett Wilson leads the Lake Travis offense and Hudson Card takes over at quarterback after verbally committing to Texas before his junior season begins. The duo connected for four touchdowns in the Cavaliers’ scrimmage against Cedar Ridge last Friday.

While the Cavaliers figure to score plenty of points, the defense proved feisty against Cedar Ridge after giving up a 66-yard pass on the very first play. Sophomore Raleigh Erwin teamed with senior Kaleb Wenson to cause problems in the middle of the line. The back seven, including linebackers Maui Trevino and Nick Villareal, swarmed to the ball, and corner Copeland Gothard held his own when matched up with Cedar Ridge’s Jaylen Ellis.

A talented group of seniors departed after leading the Warriors on a playoff run that, like Lake Travis, ended against Allen. Martin must replace 14 players who signed to play college football, but the cupboard is far from bare.

Willie Roberts starred as part of the Warriors’ secondary last season and may add quarterback to his 2018 duties. Montrell Smith and Trejon Henderson are experienced running backs. Defensive back Jayce Godley gives the Warriors a playmaker in the secondary and impressed coach Bob Wager throughout the spring and summer. Linebacker Julian Johnson also returns after a solid season and defensive lineman Chris Craft causes problems for opposing offensive linemen.