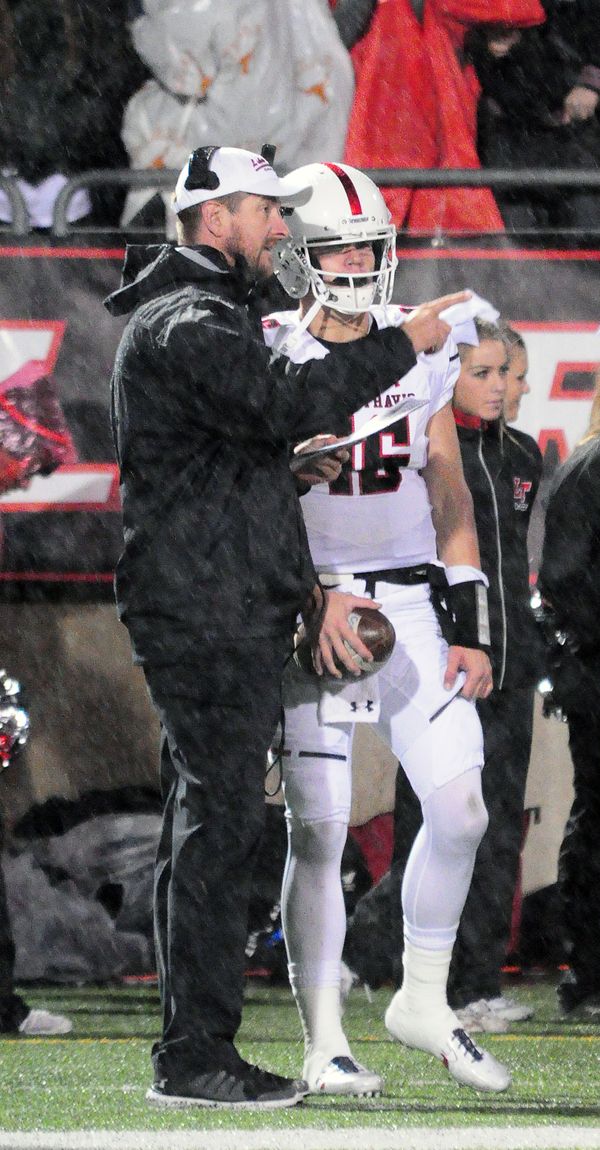 It won’t quite go down as his walk-off home run, but few Lake Travis players and fans will forget the call that may define Mike Wall’s four-year tenure as offensive coordinator.

On a rainy afternoon in San Antonio and the Cavaliers clinging to a 21-14 lead over Katy in the fourth quarter of the 6A, Division I state semifinal, Wall displayed the moxie, confidence and faith in his players that Willis High School is counting on for the foreseeable future.

“I will never forget the end of the Katy game,” said junior receiver Garrett Wilson.

Midway through that final quarter, Matthew Baldwin suffered a knee injury on quarterback keeper near the Katy 35-yard line. With starting receiver and backup quarterback Hudson Card warming up, Wall dialed up the biggest trick play in his big back of tricks. Instead of Card, Wall inserted Russell Thamm at quarterback, and the senior lefty fired a lateral to Wilson who hit a streaking Card in the end zone for a clinching touchdown.

“At that point I’m sure everyone thought we’d just call a running play straight ahead,” Wilson said last week. “To call the play that he did when he did it, I know that no one expected that. His confidence to do that is amazing.”

After two years of playing in Wall’s offense, Wilson will have to admire the coach from afar for his upcoming senior season. On Feb. 7, Willis introduced Wall as its new head football coach and athletic coordinator.

“It’s a bummer for us for sure, but we’re happy for him and his family and we wish him the best of luck for them,” said Card, who was looking forward to working closely with Wall as the Cavaliers’ next starting quarterback. “I know he will do great things over there.”

Wall takes over a 5A program that struggled to a 2-7 mark in 2017 and hasn’t been past the first round of the playoffs since 2010. The new head coach understands the task at hand.

“That they have struggled a little bit doesn’t scare me off, especially if I feel like the support is there in the administration to create something great,” Wall said. “I had a growing relationship with the superintendent, the athletic director and the principal and I felt like everything was in place.”

Lake Travis head coach Hank Carter has every confidence that Wall will help Willis find its way back into the playoffs.

“I’m excited for him and I know that he’ll do an amazing job over there,” Carter said. “It’s an opportunity to realize one of his dreams.”

In meeting with his new administration, Wall listened to the challenges facing the program and felt immediately that his experiences at Lake Travis, first from 2007-10 and most recently from 2014 through today, would serve him perfectly.

“It’s going to take work, don’t get me wrong, but the things that they said were holding them back seem like second nature to me after being in a place like this,” he said. “It’s just not what they are used to. I’m going to go there with my head down ready to work. It all felt like fixable things with great effort surrounded by great people.”

In four years as Lake Travis’ offensive coordinator, Wall saw all three of his starting quarterbacks earn scholarships to Power 5 colleges: Dominic De Lira (2014) to Iowa State, Charlie Brewer (2015-16) to Baylor and Baldwin (2017) to Ohio State. His offenses averaged 49, 52, 50 and 43 points per game. The Cavaliers have also played in the last three 6A state championship games, winning the title in 2016.

Wall takes a trove of fond memories with him to Willis, including the last two playoff runs.

“Winning it in 2016 is something I’ll always cherish,” he said. “Even though we were extremely talented, still achieving the first 6A state title especially after coming so close the year before. [I’ll also remember] our road to the final this year. Beating Judson in round two is a game I’ll never forget. And beating Katy. On the field those are two of the biggest memories I will always have. And then there are the relationships.”

Wilson said Wall’s ability to connect with players and provide a balance between relaxation and focus is second to none.

“What sets him apart is the way he connects with all of us,” Wilson said. “He is always cracking jokes, keeping us loose, but he also knows when it’s time to be tough on us. That’s what we’ll miss the most.”

“This is a unique program,” Carter said. “In the six championships that we’ve won at Lake Travis, there have been five different offensive play-callers.”

Jerry Bird ran Lake Travis’ offense in the 2007 title season. Chad Morris called his own plays in the 2008 and 2009 title years before heading off to the college ranks. Under Carter’s watch, Green called the plays in 2010 before passing the baton to Collins for the 2011 title before Wall’s title in 2016.

The new coordinator will work with Lake Travis’ quarterbacks – the last seven have earned FBS scholarships and Card is on pace to become the eighth – and he’s confident that all of the applicants will be qualified to run the offense. At this point, though, Carter places a high priority on the intangibles.

“The three things, to me, that are most important have nothing to do with their ability to call plays or their background or things like that,” he said. “Love kids. Be a great communicator with parents, kids and coaches. To be able to have an ego that you can check at the door so you can come in and be one of the guys. That’s important. To me, that’s been very, very important to our success.”

Carter said he’d start the process of replacing Wall and plans to name a new coordinator well before the Cavaliers start spring practice in April.

“We’re going to sit down with our staff, with assistant athletic director Mike Drinkwater and start the process of the search for our next offensive coordinator,” he said. “We will look at any internal applicants as well as those we get from outside the program.”