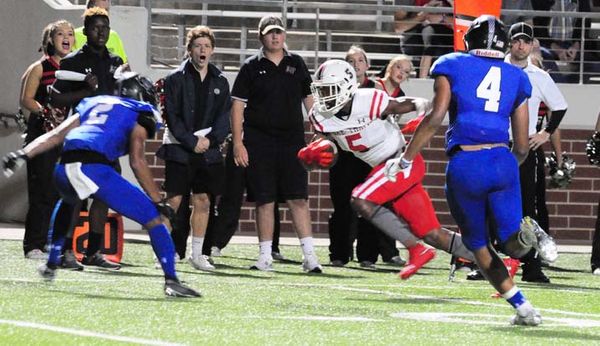 Mansfield – Persistent lightning forced Lake Travis and Mansfield Summit to abandon their game with Lake Travis leading 14-0 with 3:43 left in the first half.

The game will not count on either team’s official record.

“We felt like if we got delayed more than 90 minutes that it would have been a big hardship on us getting home,” Lake Travis coach Hank Carter said. “So after the second delay, we agreed that was enough.”

Hudson Card ran for Lake Travis’ opening touchdown and connected with Garrett Wilson for a second score. The pair had another touchdown erased due to penalty. Sophomore running back Weston Stephens, playing in place of injured Sean Brown-Nixon, rushed for 55 yards on six carries and also caught two passes for the Cavaliers.

“Weston has been a guy we felt would play a role for us, but with Sean running like he did, we thought he would be our third-down back,” Carter said. “But with [Brown-Nixon] out for a while, Weston’s been thrust into that primary role. He made some nice plays and he’ll just keep getting better.”

Brown-Nixon suffered a foot injury late in Lake Travis’ 35-14 win over Arlington Martin after rushing for 103 yards and two scores.

Lake Travis (1-0) faces Bowie next Friday to open District 25-6A play. Carter would have liked another half of football against a talented Summit team to help his Cavaliers prepare, but weather had other ideas.

“This was a great opponent tonight,” Carter said of Summit. “They do some great things defensively and offensively with their schemes and they had big, fast strong kids who were playing very hard. I wish we had another half to play against them and get better. We’ll work with what we got and go get ready for a very tough Bowie team.”

Note: While the result of the game doesn't count, coaches from both teams opted to count the statistics from the abandoned game. With his touchdown catch, Wilson tied Lake Travis' career record for touchdown catches. He shares the record of 44 TD catches with Fred Robinson.