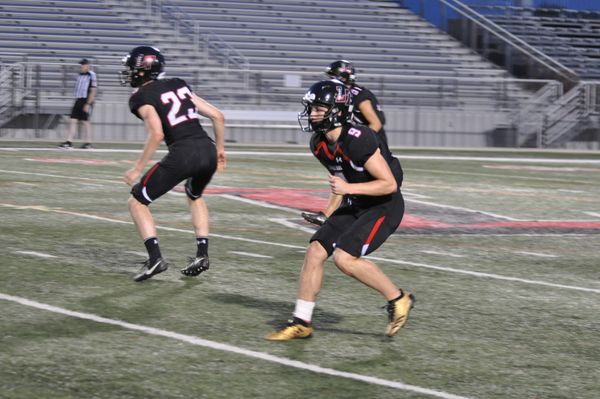 Defensive coordinators across Texas might have been well-served to have their own breakout session at last month’s high school coaching convention.

The Austin American-Statesman’s annual Fab 55 of the state’s top players lists 11 receivers in its membership, including four of the top 10 players headed by Lake Travis’ Garrett Wilson. Teams planning on making deep playoff runs must discover a way to slow players capable of making game-changing, highlight-reel catches at any given moment.

Dealing with some of the state’s top receivers is top of mind for Lake Travis head coach Hank Carter and defensive coordinator Ryan Luedecke. For the Cavaliers to accomplish their lofty goals, they know they’ll have to get consistent play from their secondary in order to slow dynamic receivers such as Bowie’s Elijah Higgins, Westlake’s Mason Mangum and, potentially, Allen’s Theo Wease.

“As far as playing top-notch caliber receivers, some of that is on the defensive backs and some of it is on the guys up front who are harassing the quarterback,” Carter said.

If a revamped defensive front anchored by Kaleb Wenson can minimize the time opposing quarterbacks have to target their big-play threats, the more effective the Cavaliers’ secondary, which also undergoes a bit of a retooling, can be. Lake Travis’ tag-team approach aims to share the burden on a group of new starters who’ll join junior Copeland Gothard in the secondary. Senior Hunter Henry returns to Lake Travis after two years starting for Cedar Park’s Black Reign, and Reese Anderson and Max Foit should play pivotal roles as well.

“The better we can be up front, that really is the key,” Carter said. “Everything becomes easier if we can be physical and dynamic up front. It allows us at the back end, if they have a really special receiver, to devote a little more attention to them wherever they line up and adjust our plan accordingly.”

Part of that adjustment will include revisiting a plan that worked well in 2017. Wilson and fellow receiver Kyle Eaves, who registered two playoff interceptions including a pick-six in against Allen in the title game, will see their share of time on defense as well. For all his prowess as a receiver, Wilson proved a lockdown corner when called upon, usually against the opponent’s top receiver, many of whom he’s befriended as they often attend the same camps.

“I’m not supposed to be out there so I really enjoy making plays out there,” Wilson said of his time at cornerback. “I’m trying to make sure they don’t catch the ball at all. They can get all the stats they want in their other games, but when they’re going against me, I don’t want them to catch anything.”

Wilson’s value to Lake Travis extends beyond his ability to catch passes or even defend them. The Cavaliers’ defensive brain trust understands that the defensive backs aren’t likely to see better competition on Fridays than they do Monday through Thursday working against Wilson, Eaves and Lake Travis’ crop of receivers.

In addition to District 25-6A matchups against the likes of Higgins, Mangum and Austin High’s Sawyer Berry, Lake Travis’ defense could find itself trying to contain dynamic receivers throughout the postseason. Judson’s Kenyon Morgan or Los Fresnos’ Nico Valenica rank among Region IVs top receivers. Arjel Henderson of Fort Bend Travis could be the top receiver in Region III. Cedar Ridge’s Jaylen Ellis, DeSoto’s LaVontae Shenault and Wease could all be potential state title game foes.

“We don’t think that we’re going to see any better athletes as cornerbacks than what we see all spring and occasionally during practice in the fall,” Carter said.