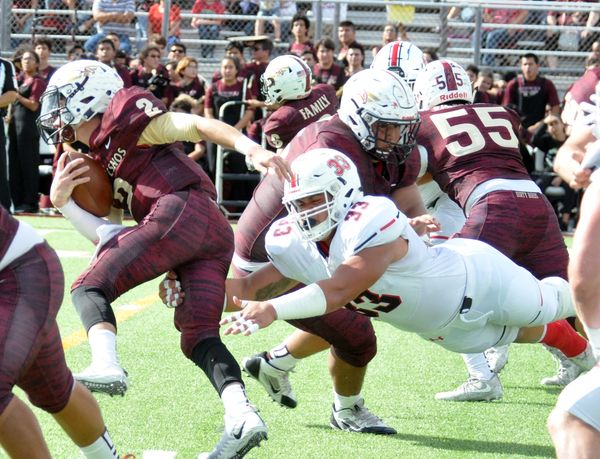 Originally published in the Austin American-Statesman. .

Saturday afternoon in the Alamodome, Lake Travis looks to run its third-round playoff record to a perfect 10-0 when it kicks off at 4 p.m. against Weslaco.

The Cavaliers have won each of their previous nine third-round games, including six against teams from the Rio Grande Valley or Coastal Bend while playing in Region IV. Those six wins have come by an average score of 53-17, and while Lake Travis coach Hank Carter knows his team’s had success, the past will have little to do with what happens Saturday.

“There are only 16 teams left and everyone has earned the right to be here,” Carter said of the Panthers. “Our kids are giving them the respect they deserve.”

Weslaco brings an 11-1 record into Saturday’s game, and Panthers have a few things in common with the Cavaliers. The Panthers loss came on Oct. 12 to Edinburg Vela. That’s the same night Lake Travis suffered its only loss, to Westlake. In the Division I playoffs, Westlake and Vela play Friday night.

Coincidence of foe aside, the Panthers also run an offensive system similar to the Cavaliers. While they don’t light up the scoreboard that same clip Lake Travis does, they don’t give up many points. Opponents have managed just 130 points (10.8 per game) against an opportunistic defense that likes to make plays in the opponents’ backfield. The Panthers average five tackles for loss per game, led by linebacker Seth Sanchez and defensive linemen Sam Perez and Jesse Ramos.

“They are aggressive and do a nice job of putting their kids in spots where they can create negative plays,” Carter said.

In addition to the tackles in opposing backfields, the Panthers have intercepted 10 passes, though Carter said they likely haven’t faced a team that can throw the ball as well as Lake Travis does. Quarterback Hudson Card completes better than 72 percent of his passes and has passed for 2,700 yards with 38 touchdowns and just four interceptions.

Lake Travis continues to work its way back to full strength. Grayson Sandlin returned with three catches against San Antonio Madison, and Garrett Wilson continues to play his way back into shape after making 12 catches and scoring three touchdowns against Madison.

“Our offense continues to get better,” Carter said. “We’re playing our best football of the season. We moved the ball in big chunks and did a nice job balancing the run and the pass.”

Like their Lake Travis counterparts, the Weslaco offense also enters the game with confidence. Quarterback Jacob Cavazos pilots an offense that’s been efficient and effective. He’s passed for 1,105 yards with 20 touchdowns and just one interception. He’s also rushed for a team-high 905 yards, topping the 100-yard mark four times.

“They are very well coached and don’t make many mistakes,” Carter said. “The quarterback is very good. He’s an able passer and he throws it well. They do some creative things in their passing game and their receivers to a very good job catching the 50-50 balls.”

Cavazos’ brother Jaden is Weslaco’s leading receiver with 29 catches. Devin Dena also makes key plays in the passing game. The Panthers also have a solid weapon in kicker Jorge Martinez, whose hit 10 of 11 field goals with a long of 46, including the game-winner against Weslaco East.

“Their players compete at a high level,” Carter said, “and they are playing with a lot of confidence. They are well-coached and won’t beat themselves. We are going to have to make plays to win the game.”

Lake Travis has won all six of its regional semifinal games against schools based in the Rio Grande Valley and Southeast Texas.