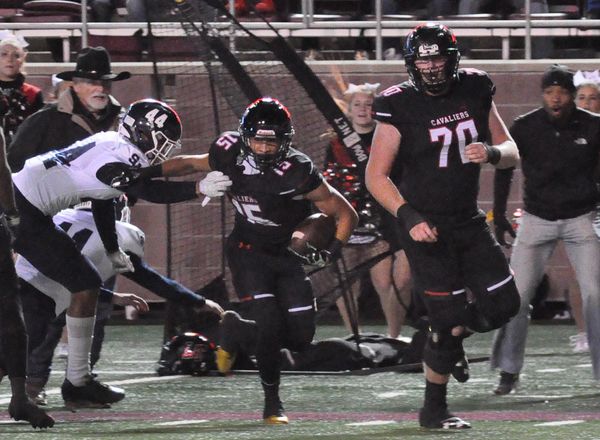 “They started off slow and lost a couple of close games,” Lake Travis coach Hank Carter said, “but they’ve been playing better. They are a dangerous football team.”

The Cavaliers and Rangers have met twice before, both in the playoffs, both Lake Travis wins, most recently in 2016. Carter said a familiarity with the Rangers’ system will help but doesn’t guarantee anything.

The Rangers play solid defense – allowing 18.9 points per game – and rely on a running game led by quarterback Levi Williams to wear down opposing defenses. The Rangers haven’t been flashy on offense – they’ve scored more than 30 points just twice in nine regular season games – but Carter said the Cavaliers know they are in for a test.

“Anderson’s running back reminds me a lot of who we’re going to see this week,” Carter said. “He’s a very physical, hard runner. We’re going to have to get a strong guy on the ground. Their backs are strong and run very hard.”

Lake Travis’ recent defensive performances – especially the starting unit – gives Carter confidence heading into the game. That unit has rounded into shape over the last month, he said.

“We’re starting to resemble what I think a Lake Travis defense should look like,” he said. “We’ve still got some things we need to work on, but we are trending in the right direction.”

In wins over Del Valle, Hays and Anderson to close the regular season, Lake Travis allowed just 16 points in the first three quarters before pulling starters.

“I think we’re falling into place,” said junior linebacker Nick Villareal. “We need to keep pushing each other. We’re playing fast and physical and we’re getting better every day. I think we’re really understanding how we need to play right now.”

“Offensively, we did a lot of good things,” Carter said following the win over Anderson.

Though receivers Garrett Wilson, Grayson Sandlin and Reid Donegan missed the game, running back Sean Brown-Nixon returned after breaking his foot in the opener. He rushed for 57 yards on just seven carries with a touchdown in his return.

“It felt great,” Brown-Nixon said. “I had been gone for so long, it was weird. It took two drives, but I finally started to feel comfortable.”

Brown-Nixon scored a touchdown on his first drive, then put together several shifty runs into Anderson’s secondary.

“Having Seany back was a bright spot and it was great to see him run,” Carter said. “We wondered how long it would take him to come in and get acclimated, but I thought he looked fantastic.”

Carter also pointed out the play of sophomore tight end Lake McRee, who returned to make his first four catches of the season after missing several games.

“Having Lake McRee back at tight end helped,” Carter said, referring to playing without top tight ends Sandlin and Donegan. “He was active, played rowdy and made some catches, and he’s just learning how to play football. He is wildly talented and his experience playing quarterback and basketball help create mismatches in his favor.”

Carter hopes Lake Travis will continue to get healthier – Wilson might be able to play after missing the four of the last five games – as the Cavaliers continue to gather momentum.

“We are trending in the right direction,” Carter said. “I really think that we have an awesome football team. Hopefully we’ll be able to go out there Friday and execute against a really good football team. We just want to make sure that a week from now, we’re getting ready for another game during Thanksgiving break.”