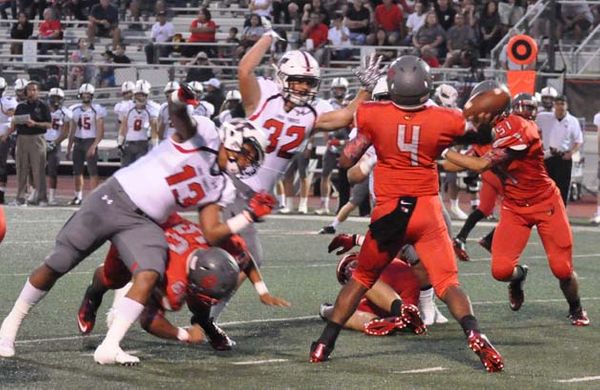 There are always two schools of thought when a bye week follows a loss, and especially a rivalry loss. The bye is either frustrating because teams want to get right back on the field or welcome because there’s plenty to work on.

Lake Travis find itself more in the latter category, using last week’s bye as a mini-spring practice and time to get past some bumps and bruises.

“We just took some time to focus on us and how we can get better at the things we know we can control,” Lake Travis coach Hank Carter said Monday. “We had a good week. I think we got better as a football program, that’s for sure.”

Without the urgency of game preparation, Carter said the Cavaliers returned to the basics. While the 44-14 loss to Westlake proved frustrating, Carter said that loss won’t define the season, much the same as a win wouldn’t guarantee a great season. Take 2017 for example, when Westlake topped Lake Travis 21-14 but the Cavaliers regrouped and reached the state championship game.

“I think our kids understand that there’s a lot left to play for,” he said. “We understand that had we won that game, nothing is guaranteed, either a great season or a poor season. Those things are not related to one game.”

If there’s an element to the Westlake game the Cavaliers addressed during the bye week, it’s the speed at which they played, which has long been a staple of the Cavaliers’ philosophy: play at a fast tempo on both sides of the ball.

To improve reaction time, the players spent the week focusing on fundamentals while the coaches evaluated the way they construct the game plan.

“We need to rep the things that we’re going to do and be good and at probably need to only put a package together for a game – offense, defense and special teams – that our kids can go execute at full speed flying around,” Carter said.

Lake Travis (5-1, 4-1) has traditionally been very good both out of the bye week and following a regular season loss. In the three games that followed last year’s loss to Westlake, the Cavaliers outscored the opponents 151-7. Del Valle (4-4, 2-4), Carter said, presents some unique challenges, especially offensively, that his defense must deal with.

“Offensively they are like two offensives in one,” Carter said. “They get under center and run what you’d call the slot T or wing T, and then they’ll spread out and run some option or try and attack the secondary with some double moves. It’s a lot to prepare for.”

Del Valle’s found its success on the legs of Tavierre Dunlap, a sophomore whose rushed for more than 1,200 yards and 15 touchdowns, half of which came in wins over Austin High (384 yards, 5 TDs) and Lehman (226 yards, 3 TDs). Quarterback Elijah Washington has rushed for eight scores and passed for six more. Slowing the Cardinals one-two rushing punch will be Lake Travis’ top priority, especially given that Westlake quarterback Taylor Anderson and running back Tripp Graham combined to gain 263 yards against the Cavaliers.

“When we see the wing T, we need to be strong at the point of attack, read our keys and fit the way that we’re supposed to with a lot of physicality,” Carter said. “When they spread it out, we have to be able to tackle in space and play assignment football on their option game, and we can’t take the bait on some of the double moves they’ll try against our secondary. They do some nice stuff offensively that will be a challenge.”

The bye week brings the Cavaliers more time to recover from some injuries that hampered players against Westlake. Defensive end Matthew Peterman and defensive back Max Foit missed the second half against the Chaps, and linebacker Nick Villareal and receiver Grayson Sandlin missed the game entirely. All but Sandlin, Carter said, should be back on the field Friday.

Friday’s game also marks the 10th anniversary of Lake Travis’ 2008 state championship. The team, Lake Travis’ first to finish a perfect 16-0, will be honored at halftime. As of Monday, approximately 20 2008 team members were expected to attend.