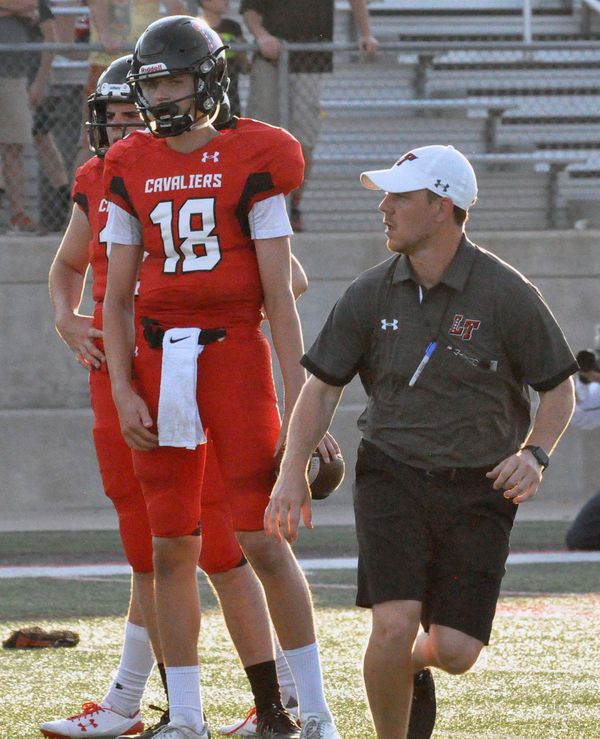 Two months ago, Will Stein didn’t see himself as a high school football coach. He also didn’t figure that one of the state’s most intriguing jobs would come open.

“Being 28 years old and being able to be an offensive coordinator at a top three program in the state of Texas was an opportunity that I couldn’t pass up,” Stein said last week after becoming the new play-caller and quarterbacks coach at Lake Travis.

Stein, a former quarterback at Louisville and most recently an offensive analyst on Tom Herman’s staff at the University of Texas, shares some similarities with the man he succeeds, Mike Wall. Wall left Lake Travis this winter to become the head coach/athletic coordinator at Willis High School.

Lake Travis head coach Hank Carter acknowledged the fact that, like Stein, Wall was an accomplished college quarterback who served a stint as a graduate assistant coach before moving to the high school ranks but says those are merely coincidental.

“We were looking for a number of different attributes, and we were blown away by Coach Stein,” Carter said. “Some of that has to do with his personality, some of it with his belief system.”

The new coordinator comes in knowing he doesn’t have to reinvent the offensive wheel. He knows Lake Travis’ reputation for developing college-level quarterbacks and the reputation of one of the most dominant offenses in the state with their spread attack that has evolved from offensive-minded head coaches including Jeff Dicus and Chad Morris and coordinators-turned-head-coaches Matt Green, David Collins and Wall.

“There are things that we aren’t going to negotiate on, the things we feel like are staples to the program, but we’re not going to make the next coordinator run Mike Wall’s offense,” Carter said in February. “That’s not fair to the next guy.”

Carter expects that Stein will put his spin on the Cavaliers’ well-established, high-scoring spread. Stein’s experience began with implementing a West Coast-styled passing game working under the direction of Shawn Watson and Mike Groh. He learned the spread from Sterlin Gilbert and feels comfortable mixing both styles to maximize his offense’s effectiveness.

“We want to play fast, play with tempo to exploit the defense and to use our conditioning to our advantage,” Stein said. “We want to throw the ball down the field.”

More than any particular style, Stein wants to make sure he maximizes the production of the Cavaliers’ best players.

“My big thing, and I think every coach on our staff will agree, it’s not so much the plays and scheme as it is the Jimmy’s and Joe’s,” he said. “going to feed our studs and be very match-up driven and create mismatches off of motion, shifts and tempo. My job is to get our best players the ball as often as we can, let them make people miss and go score touchdowns.”

While Lake Travis will be Stein’s first foray into high school coaching, he’s got plenty of experience with successful high school programs. Growing up in Louisville, Stein played at Trinity High School, a program he likens to Lake Travis with the success it’s had over the years.

“It’s kind of like the Lake Travis of Kentucky,” he said.

After winning three state titles as a high school quarterback, Stein walked on at Louisville and eventually won a scholarship – and the starting job – under Watson and head coach Charlie Strong. An injury three games into his junior season opened the door for his understudy – “some kid named Teddy Bridgewater came into the game,” Stein joked – and likely set him on a path to coaching. He finished his playing career at Louisville while in grad school and transitioned into a graduate assistant, working first under Strong and Watson and then under Bobby Petrino when Strong left to take the Texas job.

“Working for Coach Petrino was probably the best thing that’s ever happened to me, learning his system, learning how he attacks a defense and really exploiting matchups,” Stein said. “That was huge for me. I learned a lot from him.”

Stein joined his former coaches in Austin the following year and stayed on the staff when Herman succeeded Strong. He credits working with a number of accomplished mentors for getting him ready for making the jump to Lake Travis.

“I’ve been around a lot of different guys, a lot of different offenses,” Stein said. “Any time you get a chance to run your own show and be the head coach of the offense, you’ve got to take advantage of it. It doesn’t really matter what level it is.”

Stein also pointed out the stability that he sees in the Lake Travis staff. Carter’s served as head coach since 2010 and the nucleus of the staff has been here for that duration as well.

“Having the stability of Coach Carter and the program that he’s set where you probably don’t have to wonder at the end of the season if we’re all going to be here, all of that type of stuff that goes on in college football, was key,” Stein said. “To be able to stay grounded here – I just got engaged and my fiancé got a brand new job – to make our roots here in Austin was an opportunity I couldn’t pass up as well.”

The new coordinator, who knew of Carter’s well-deserved reputation as a defensive coach, also pointed out Carter’s unselfishness with personnel.

“You think a defensive head coach would want to have all of the speed and size on his side of the ball, but he does a great job of letting us work players in different positions,” Stein said. “He’s more of an offensive guy as a defensive guy than I would have ever imagined. That’s been pretty cool to see.”

College: Louisville: Letterwinner and part-time starter. Played in 24 games, completing 59 percent of his passes for 1,273 yards and 6 TDs