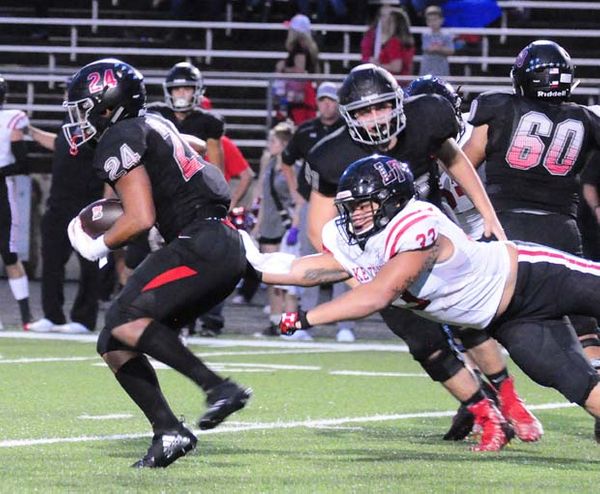 Cavaliers ramp up practice intensity to prepare for Akins

After three weeks, Lake Travis fans will finally get an up close and personal look at their Cavaliers.

Fans hoping to see quarterback Hudson Card and receiver Garrett Wilson might want to be in their seats prior to kickoff, at least if this Lake Travis-Akins game plays out like any of the previous meetings. The teams have met four times, all Cavalier victories with an average score of 60-14.

Card and Wilson turned in their best efforts of the young season last week in a 42-21 win over Bowie. The quarterback started quickly and never slowed down. He passed for 337 yards and four touchdowns – two to Wilson – and added another 51 yards on the ground with another touchdown as Lake Travis opened up a 42-7 halftime lead. Neither Card, Wilson nor any of the other starting receivers played in the second half.

“We look at this week the same way we look at every other week,” Lake Travis coach Hank Carter said. “We prepare to win the game. We also know that Akins may not have the same depth as some of the other teams we’ve played.”

Carter understands that his starters – provided they continue to execute as they did against Bowie – may not play a full game, and he’ll account for that possibility by working them against Lake Travis’ starting defense a bit more during practice leading up to the game.

“We’re going to prepare the way that we need to,” Carter said. “We are doing more good on good [starting offense vs starting defense] in practice, and we’re also going to get everyone more reps so they can play well when they get into the game.”

After winning its first two games, Akins had the scheduling misfortune of opening district play against a Westlake team looking to get the taste of a frustrating week 2 loss to Cypress Ranch out of its system. The Chaps did just that, beating the Eagles 67-0. Westlake led 32-0 after the opening quarter and 46-0 at the half.

“Akins made some mistakes, but they were able to move the ball at times,” Carter said after breaking down the tape of the Akins-Westlake game.

Quarterback Nick Cagle leads the Akins attack, and versatile Alpha Mara leads the Eagles with 114 rushing yards, including a 68-yard touchdown against Cedar Creek. Antonio Lopez has been Cagle’s favorite target with 10 catches in three games.