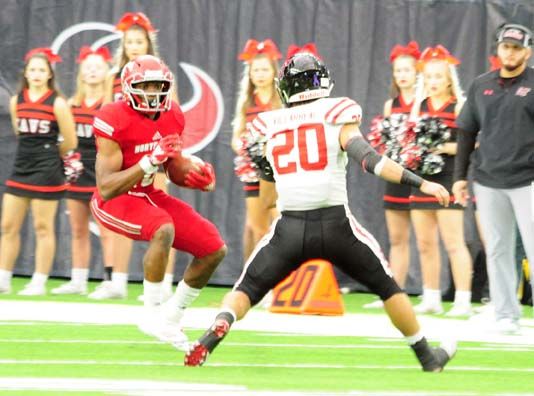 When the season heads into the home stretch – which for Lake Travis traditionally means the state semifinals or finals -- Cavaliers coach Hank Carter often tells his players to cherish their last few practices because “the light at the end of the tunnel is getting pretty big.”

On Saturday afternoon at NRG Stadium, that light turned out to be an oncoming train in the form of Galena Park North Shore. The second-ranked Mustangs (15-0) looked every bit the part of a state championship favorite, ending Lake Travis’ season 51-10.

“That is not what we hoped,” Carter said. “They are a great team. They have some excellent athletes and their kids are strong. We just weren’t able to get them on the ground.”

Zach Evans rushed for 196 yards and 4 touchdowns, including a 60-yard score on his first carry, and Dematruis Davis passed for 231 and two touchdowns as the Mustangs scored on six of their first eight possessions. North Shore finished with 557 yards of offense.

Lake Travis knew stopping North Shore’s offense would be a challenge, but the Cavaliers hoped to find more success against North Shore’s pass rush. They didn’t. After completing three of his first four passes, Hudson Card struggled in the face of pressure led by Tony Bradford and Jordan Revels.

“We just couldn’t get into any kind of rhythm,” Card said after completing 13 of 33 passes for 158 yards. “They are a good team and we just came up short. We did the best we could.”

After leading the Cavaliers to a 3-0 lead early, Card struggled. With North Shore’s pressure making him get rid of the ball before receivers had time to beat man-to-man coverage, 12 of Card’s next 13 passes fell incomplete. He failed to complete 50 percent of his passes for the first time all season. He came into the game completing 70.9 percent of his passes.

A stretch at the end of the second quarter exemplified Lake Travis’ frustrations. Trailing 34-3, the Cavaliers marched into Mustang territory. From the Mustang 40 with 20 seconds left, Garrett Wilson finally got behind the North Shore defense but couldn’t haul in a would-be touchdown pass. A final Hail Mary fell incomplete as well, and the Cavaliers never got back into the game.

“Throughout the first half, we thought we’d just keep trying to do our thing and get back into the game,” Wilson said. “There was a lot of time left in the game, but we could just never make it happen.”

Battling tight coverage all afternoon, Wilson gave credit where it was due following the game.

“They are a physical team,” Wilson said of the Mustangs. “They started hot and they beat our butts.”