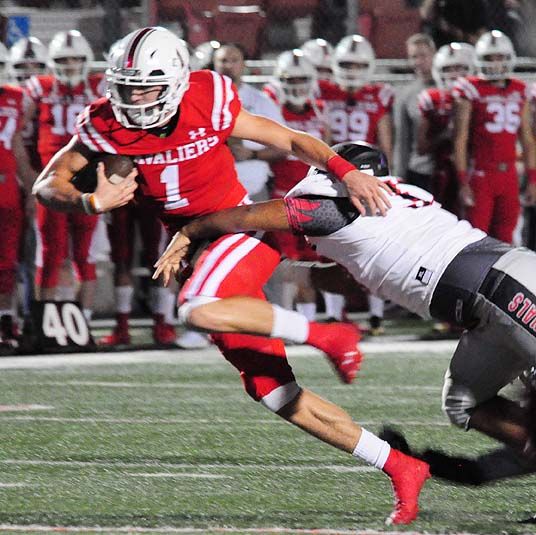 Hudson Card passed for a career-high six touchdowns and ran for another as Lake Travis rolled past Del Valle 55-23 in a District 25-6A game Friday night.

After being frustrated by Westlake’s defense in a 44-14 loss on Oct. 12, Card completed his first 13 passes against Del Valle and threw just two incompletions on the night. The Lake Travis junior and Texas commit completed 20 of 22 passes for 274 yards.

“It felt good to get back out here and get the bad taste out of our mouth,” Card said. “We came out hard and determined. We wanted to get back on track and it was a good one tonight.”

“When Garrett can’t play a lot of guys step up,” Card said. “That happened tonight. I can rely on everyone.”

The Cavaliers (6-1, 5-1) scored touchdowns on their first eight possessions of the game while rolling up 487 yards of offense. Weston Stephens led the Cavaliers’ rushing attack with 85 yards and a touchdown on just 11 carries. Card added 66 yards rushing.

“I’m really pleased with the way our offense played tonight,” said Lake Travis coach Hank Carter. “We were able to run the football and we were able to pick up their pressure. We have lots of guys who can catch the ball and Hudson did a really good job getting it to them.”

Lake Travis’ defense held Del Valle (4-5, 2-5) running back Tavierre Dunlap in check. While he finished with 100 yards on 17 carries, 49 yards came on a final touchdown run with just two minutes left. The Cardinals managed 245 yards rushing on the night, but half of that total came after Lake Travis had opened up a 35-9 halftime lead.

“We put in a new formation so we could stop the run better,” said Lake Travis linebacker Maui Trevino. “We brought a safety down [closer to the line of scrimmage] and we played faster than we have been playing.”

“The quarterback run hurt us a little bit, and we’ve got to get better at that, but overall I think I’m pleased with the way the defense played, especially up front,” Carter said.

But Lake Travis responded with five consecutive touchdowns to stretch its lead to 49-9 in the third quarter. After Card found Eaves for a 20-yard score in the second quarter, Kaleb Halfmann recovered Nathan Ellisor’s onside kick, and Card connected with DeNisio for a 14-yard touchdown.

The Lake Travis defense held on fourth down twice early in the third quarter, leading to a touchdown run by Stephens and a 22-yard pass from Card to Eaves. After a Del Valle punt, Card capped Lake Travis’ offensive outburst with a touchdown pass to Donegan.