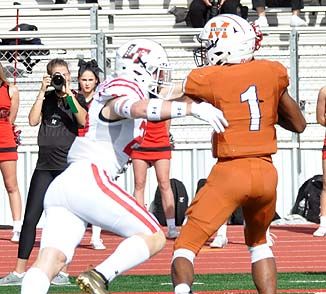 Published in the Austin American-Statesman.

On the game’s second play, Madison quarterback Dante Heaggans faked a handoff to Christian Hernandez and dropped back to his right waiting for a receiver to break open against the Cavaliers’ defense. None did, and Heaggans quickly found himself under pressure from onrushing Lake Travis safety Hunter Henry, who sacked the quarterback for an 11-yard loss.

“Actually, I busted my assignment on that play,” Henry said afterwards. “I was supposed to drop a little deeper, but I saw an opening and said ‘I’m taking it’ and ended up making the sack.”

On the sidelines, Henry said he drew both praise and ire for the play.

“I was yelled at for it, but at least it was a good thing,” he said with a smile after proving the age-old coaching mantra that says if you’re going to make a mistake, make it at full speed.

Following a Madison punt that traveled just five yards, Hudson Card sprinted into the end zone for a 28-yard touchdown run and the Cavaliers never trailed. After Heaggans scrambled away from pressure and found Hernandez for a second-quarter touchdown to bring the Mavericks within 21-14, Lake Travis’ defense tightened up.

Lake Travis’ defense forced three-and-outs on five of Madison’s next six possessions. The sixth possession saw Madison drive to the Lake Travis 25 before Graham Torres’ 42-yard field goal try missed to the left as time expired. By the time Heaggans broke loose for a 74-yard touchdown late in the third quarter, the Cavaliers had stretched the lead to 56-14.

“It was about trying to keep that quarterback in the pocket,” Henry said of the Cavaliers’ game plan. “We just tried to stick on their receivers like glue. We were playing very well, especially early on.”

Though the Mavericks finished with 374 yards and 35 points, the bulk of that came after the outcome had long been decided and the Cavaliers had sent the starters to the bench. Madison kept its starters on the field and gained 202 of its yards in the final 14 minutes.